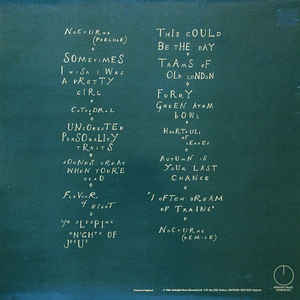 “Autumn Is Your Last Chance” starts off with a pretty typical Robyn Hitchock guitar lick, notes corkscrewing around each other in reassuring ways, but it’s also wispy, like you’re hearing it from a far-off place. There’s a ghostly bass floating around as well, and is vocals are quiet and sad — one might even call them autumnal — as he describes the fallout from a relationship that’s ending.

It’s incredibly sad-sounding, like he’s wandering around, lost in . And without even taking a pause, he continues.

It’s at this point where “Autumn Is Your Last Chance” starts changing: the guitar lick switches up on itself, and the bass stops floating and starts building, and Robyn’s voice breaks out of the fog and into the twilight.

That’s the last lyric he sings, as the guitar starts winding around itself a bit and then as if rising from a foggy lake, a whole chorus of overdubbed Robyn Hitchcocks are singing “ahhhhhhhhhhhhhhhhhhhhh” and the guitar suddenly finds the most incredible lick to play over and over — weirdly enough, a distant cousin to the riff that powers The Jesus And Mary Chain’s “Something’s Wrong” — and oh my god, this is exactly what melancholy sounds like. And it is the most beautiful thing in the universe.

I’ve listened to “Autumn is Your Last Chance” countless times over the decades, and that coda has never not once not totally and utterly floored me.

“Autumn is Your Last Chance”