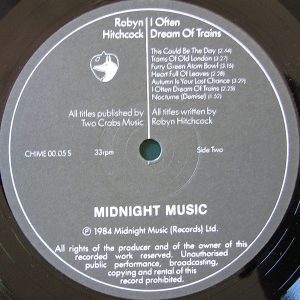 Obviously, there are a lot of funny songs in Robyn Hitchcock’s oeuvre — that’s part of his appeal, of course — but what I love about “I Often Dream of Trains” is that unlike, say “Uncorrected Personality Traits,” which signaled its intent from the moment he sang the opening phrase.

Look, I’m sure that Basingstoke and Reading are perfectly lovely places — I don’t think I’ve been to either one, though I know that Reading has a festival or did back when we could do things like that — but they aren’t you know, paradise.

Unlike a lot of the songs on I Often Dream of Trains, “I Often Dream of Trains” is relatively static, musically: it doesn’t really have any choruses — unless you consider the listing of “Or Basingstoke/ Or Reading” to be a chorus more than it is a Dylanesque verse-ender, though its long gone after the second verse.

I wish I remember exactly when it was that “I Often Dream of Trains” entered my life. I think it was in the mid-1980s, after Fegmamia! and Gotta Let This Hen Out! Probably 1986, when it was first released in the U.S. In any event, I wasn’t even remotely prepared for how much this whole album would affect me, especially since I’m pretty sure my first exposure was the video on The Cutting Edge or maybe Night Flight, and at first I was underwhelmed.

That said, eventually I got overwhelmed by I Often Dream of Trains, which sounds like it was recorded in the first week of January, when all of the holidays have passed, the sun is still ineffective, and the “new” in “Happy Year” seems like a cheat. And nowhere more does it have that feeling than on that title track, which ends with Hitchcock fading off into the distance, pleading “baby” to someone who might be gone forever, or maybe even didn’t ever exist.

“I Often Dream of Trains”