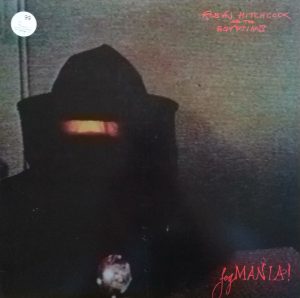 What this meant was the Hitchcock had a crack rhythm section who could enhance and embellish his songs, both musically and vocally. And, indeed, Fegmania! definitely made a dent on college radio, as songs like “Egyptian Cream” and “The Man With The Lightbulb Head” got some pretty extensive airplay.

That said, I didn’t love Fegmania!. I mean, it was fine, but felt a bit overproduced, laden down with keyboard overdubs, which signaled to me that Robyn didn’t fully trust the songs. Which, also, were fine. But only “Strawberry Mind,” “Heaven,” and “Goodnight I Say” actually broke through for me, and it’s one of the songs that really relies on the rhythm section to get it over.

As I was swimming under the sea
I heard the voices calling to me
“Know that you’re drowning, too late to stop
We’re here to help you over the top”
Now I’m a doctor, now you’re a nurse
Now you’re an astronaut driving a hearse

And then out of nowhere, Morris Windsor drumrolls into a speedy double-time and they’re off, Robyn chanting “goodnight I say” over and over and over while everybody “ahhhhhs” behind him. And then again out of nowhere, they power down into a beautifully weird psychedelic section, Metcalfe swirling his bass around Windsor’s drums which are somehow keeping the beat without playing any beats.

And then back into the chorus, and then another swirling verse. It’s amazing how they can jump from two completely different modes without getting whiplash. And it’s definitely why he rode with the Egyptians for the next decade.