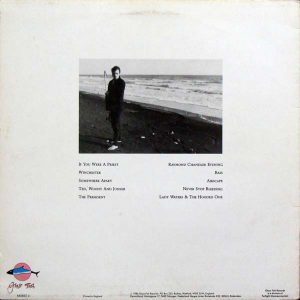 “Airscape” just might be my favorite Robyn Hitchcock song.

It’s most certainly one of his favorites, from all accounts, and it’s the centerpiece of the second side of one of his greatest records, Element of Light, floating in on a backwards guitar, already in progress.

“Airscape” is one of those songs that sounds like its title, as it always feels lighter than air, with drummer Morris Windsor playing a simple mid-tempo beat and bassist Andy Metcalfe gliding along with it. Robyn himself sings at the very top of his range, slipping into a falsetto when he absolutely has to.

Part of the songs etherial feel is due to the glass harmonica played by Roger Jackson, which dances around the jangly guitar of Robyn Hitchcock, especially on the chorus, and dances with the backwards guitar on the solo, adding a melancholic spookiness to the proceedings.

Hitchcock has said that “Airscape” was about a beach he loved on the Isle of Wight — the very beach he’s standing on the back cover — and how he pictured the ghosts of the people who lived there hovering overhead. But, of course, I didn’t have to know that to enjoy one of my all-time favorite Robyn Hitchcock verses.

And in the element of laughter
The quick explosion and the slow
Release of heat, you

I have no idea exactly what the “element of laughter” is, but I do know that I’d love to experience it. Maybe I already have. All I know is that when Robyn hits the final long “over youuuuuuuuuuuuuuuuuu”, it’s utterly fantastic, and the song realizes that it ain’t gonna get any better and collapses in upon itself with one last round of backwards guitar.