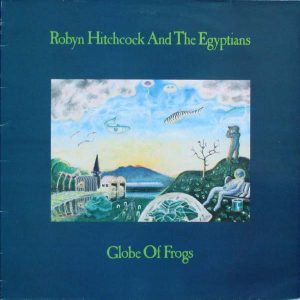 And hey, on one level it made sense: he was easily as tuneful as, say R.E.M., which definitely helped, but he was also an oddball who often put his prettiest melodies to lyrics that were surrealistic and weird, and often pretty dark, to boot.

Which isn’t to say that it was a bad idea, either for Robyn or A&M: even if he was destined to be a cult artist, the exposure he got meant that he built up an audience that got to be large enough to sustain him to this day. There were always going be people who loved a great melody yoked to crazy-ass imagery, and if more of those people found him because he got “Balloon Man” on 120 Minutes, then huzzah!

It’s just that it was unrealistic that a song like “Balloon Man” or even “Madonna of The Wasps” — which might be the prettiest song anybody has ever written — was ever going to break top forty or even AOR radio, though it would have been cool if they had, of course.

Anyways, Globe of Frogs is a more guitar-oriented album than the previous two, keyboardist Roger Jackson having left, and Peter Buck joining on a couple of tunes — the first salvo of a collaboration that lasted off and on for over two decades — though today’s song ain’t one of them.

“Unsettled” rides Robyn Hitchcock’s chunky, churning rhythm guitar, and a big Morris Windsor drum beat, and is one of those songs that takes a long time to get to it’s main hook, as verse after verse of nonsensical lyrics fly by, except for a short breakdown, which is basically there just to provide some breathing space prior to the last verse. But otherwise, it’s all tension.

Got a heart exact tomato flourish on a spike of greedy prongs
If a baseball dug moussaka Alan wraps the biscuit in a
Novel thongs accepted
Wvery turning bends away
Biting off a crust, the troubled
Hey do you

And just before he sings “heyyyyyyyy do youuuuuuu” the whole song changes, and suddenly Robyn’s asking:

And that’s all it is. Just those three times, but it’s also somehow enough. After that Robyn plays some more guitars until the fade. After which we get a quick excerpt of the b-side “The Ghost Ship,” and we’re on to the next song, about which, more tomorrow.