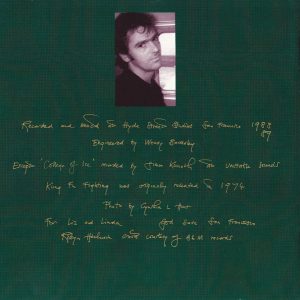 Once again, it’s just Robyn Hitchcock and single acoustic guitar, which he starts off playing tentatively, like he’s avoiding actually singing the song — which I imagine was written at a vista point on Highway 1 while a late afternoon storm pummels everything.

It’s basically all picking until he gets to the devastating chorus.

It’s accompanied by a repeating guitar lick that adds a shit ton of tension, and also totally makes the chorus jump out compared to the rest of the song, which just gets more and more desolate.

And I remember when I was young
They said, “Work hard and die suddenly
Because it’s fun.”
And so I tried it — I did what I could
It made no difference, it never did any good

Robyn’s singing on this verse is exquisite, ranging from a near whisper on the first line, to a falsetto on “die suddenly” to a full exhortation on “made no difference, it never did any gooo-hoooood”

Of course, because it’s a Robyn Hitchcock song, it gets weird.

‘Cause I’m a fish baby, with a shimmering skin
And I find an opening, and slide right in
The sea is my mother, pea-green and wild
There’s so many ways you can screw up a child

Weirdly enough, I’ve always connected “there’s so many ways you can screw up a child” with “Uncorrected Personality Traits,” even though in the actual verse, it’s something completely different.

For those who love Robyn Hitchcock’s more electric eccentric songs, something like “Raining Twilight Coast” might be too slow, too dark and too despairing — like most of Eye — but I love it, even as I can see why Eye was released on Twin/Tone and not A&M.