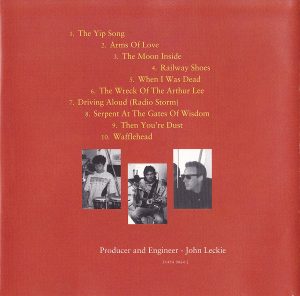 That said, my favorite of all of his Dylan songs was an original, “Serpent at The Gates of Wisdom,” which was a clear attempt to recreate the think wild mercury sound of Blonde on Blonde.

Serpent at the gates of wisdom
Curling round a tree
WIth your eyes so dark and empty
Looking straight through me
How did you get so unwinding?
Do you know my sins?
When you’re so close to the answer
Why don’t you go in?

Like all of Respect, “Serpent At The Gates of Wisdom” was recorded in Robyn’s living room, which I know from personal experience is a fantastic way to record an album, because it’s a much more relaxed place than a studio. Sure there might be leakage, but so what, it makes the sound fuller too.

Serpent at the gates of wisdom
Who did you deceive?
She was weak, but that’s no reason
For what you did to Eve
You’re a fool — you broke the stillness
She gave birth to desire
Rolling down the frozen highway
Like a burning tyre

I think you can hear that fullness in “Serpent at the Gates of Wisdom,” which starts off Robyn blowing a harmonica over an acoustic guitar before Andy Metcalfe fires up the bass, organ and piano, giving it that proper sound.

Of course, I’m going to admit that I’m eternally a sucker for the thin wild mercury sound, the way the piano dances around the organ, the way the guitar strums its support, and of course the harmonica breaks. And “Serpent at the Gates of Wisdom” has all of this stuff in spades, and some great lyrics, too.

Serpent at the gates of wisdom
Where do you belong?
Wisdom cannot be transmitted
It keeps you hanging on
Do you really serve the Devil
If it’s all God’s plan?
Good and evil need each other
Honey I’m your man

That last couplet is one of my favorite Robyn Hitchcock lyrics, just witty as fuck, which helped make “Serpent at The Gates of Wisdom” my favorite song on Respect, which — and I don’t think I knew at the time — was the end of an era. Not only was Robyn Hitchcock’s deal with A&M over, he also decided to dissolve the Egyptians, and when he resurfaced, three long years later, it would be with a different label, and with his best album in a decade.

“Serpent at The Gates of Wisdom”


“Serpent at the Gates of Wisdom” Live on 120 Minutes