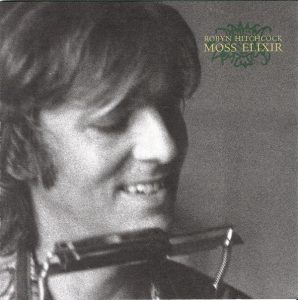 Said album, Moss Elixir, was packaged as if it was another installment in the sequence of acoustic albums he’d started with I Often Dream of Trains and continued with Eye, but that simply wasn’t true. While Moss Elixir definitely had its share of Robyn-with-an-acoustic-guitar songs — like today’s “Heliotrope” — it also had things like the bouncy, horn-driven “DeChirico Street” and the classic jangle of “Alright, Yeah.” The end result was Robyn’s greatest album of the 1970s, a tour de force of everything that makes him great.

Opening with a cascading acoustic guitar that quickly resolves into picking as Robyn starts singing, “Heliotrope” could very easily fit on either of his other acoustic albums, with Robyn singing at the top of his register without ever slipping into a falsetto, and hardly any overdubs, though it was impossible for him not to overdub harmonies on “she worships the sun.”

The end result, especially when sandwiched between the jarring “Devils Radio” and soaring “Alright, Yeah,” was a reassurance that Robyn could still pull out the acoustic and totally stun you with a lovely, evocative song.