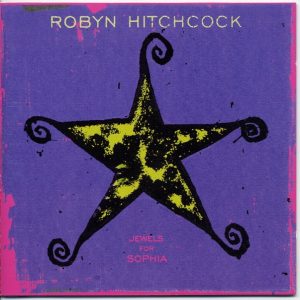 Some of it was recorded in London, some in Los Angeles, and some in Seattle, and maybe that’s why it felt kind of disjointed to me. That said, it still had a couple of great songs on it, including one of his best songs ever, the jaunty “Viva! Sea-Tac,” which rides on a Young Fresh Fellows rhythm section (whom you might remember I saw open for Robyn way back in 1986) and a Peter Buck guitar riff.

As you can probably tell from the title, “Viva! Sea-Tac” is one of Robyn’s most joyful-sounding songs, and features a sing-along chorus. 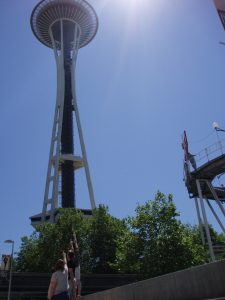 It’s a killer chorus, full up all the way, with a tremendous stop-time in order to emphasize the joke at the end. And that’s topped by what just might be my all-time favorite Robyn Hitchcock couplet:

There was a point in the mid-2000s where Rox and I went to Seattle every year to visit Jimmy and Tim, who had moved up there, and even when we didn’t go up in the Space Needle, Robyn’s anthropomorphizing of a mid-century modern tourist trap built for the World’s Fair the year I was born — the tallest building west of the Mississippi for awhile — totally played in my head every time we saw it.

It’s just so much fun. As is Robyn’s rant at the end of the song:

After which he exclaims “Alright, we can probably stop” as the song sputters to an end.

In a way, “Viva Sea-Tac” is a warm-up for Robyn’s recordings with the Venus 3, two-thirds of which played on “Viva! Sea-Tac,” which were some of the most fun recordings of his career (and just around the corner!).