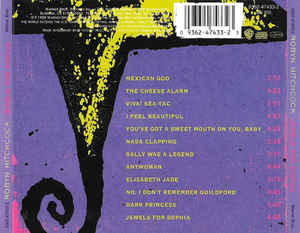 This is my second-favorite song in what is perhaps the all-time smallest category: “Late-90s Songs About Gene Hackman as Sung By 1980’s College Rock Icons.”

The other song is, of course, The Hoodoo Gurus “Gene Hackman,” which we discussed a little over four years ago, back before the world blew apart.

And while the Gurus song was a straight-up punk raver, Robyn’s was a bonus acoustic track stuck way after the final official song on Jewels For Sophia, which was a thing that people did back in the 1990s, when they realized that they could dick around with the format. That’s one thing I don’t miss, actually. Well, that, and the thing about putting the introductions to a live song at the ending of the previous track.

There’s not a lot going on musically in “Don’t Talk To Me About Gene Hackman:” it’s basically just Robyn with an acoustic guitar, and it sounds like it was recorded by one of the audience members as opposed to a professional setup. Which adds to the charm, like Robyn just made it up on the spot like one of his funny rambling intros.

In fact, as it progresses, “Don’t Talk to Me About Gene Hackman,” gets weirder and weirder, and funnier and funnier to boot, especially as the audience gets into it.

Obviously, it’s a goof, especially when compared to the Gurus’s full-throated, utterly enthusiastic rave, but of course, someone as awesome as Gene Hackman contains multitudes, and why not have two totally different songs praising him? In fact, two is clearly not enough.

“Don’t Talk To Me About Gene Hackman”