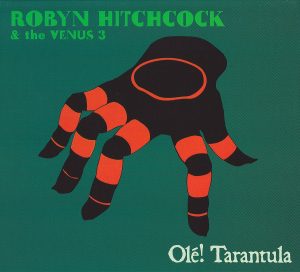 I mean, there were good songs on both 2003’s Luxor and 2005’s Spooked — both of which were mostly acoustic and the latter of which was a collaboration with Gilian Welch & Dave Rawlings, a pair a names which always excites people smarter than I am — but honestly, it had been nearly a decade since Moss Elixir, and I was beginning to wonder if Robyn was gonna ever release an album I loved as much as that one.

And so, The Venus Three to the rescue! The Venus Three, of course, were drummer Bill Rieflin, drummer for Ministry and R.E.M. — and who sadly passed away earlier this year — Young Fresh Fellow Scott McCaughey, and Robyn’s eternal ringer, Peter Buck.

And so if the album they all made, 2006’s Ole! Tarantula wasn’t technically a comeback, it sure felt like one, from the opening fuzz guitar of the lead track, “Adventure Rocket Ship.”

Adventure rocket ship
Inside a head parade
A message from the future
You crash upon a star!

Attention rocket ship!
A message from the grave
You rock me like a pharaoh
I hear you in my voice
You crash upon a star

Ole! Tarantula was recorded in Seattle, by then the home of both Buck and McCaughey, which is why other Seattle music luminaries, like President of the United States of America and Harvey Danger leader Sean T. Nelson join in on the vocal harmonies, and the round robin bridge.

And with Morris Windsor joining each of the “starrrrrrrrrrrr,” there’s even the tiniest bit of Egyptians madness in there, as well, though “Adventure Rocket Ship” really didn’t sound anything like The Egyptians. Instead, it sounded like yet another rebirth for Robyn Hitchcock, and he would ride with the Venus 3 for the rest of the decade.