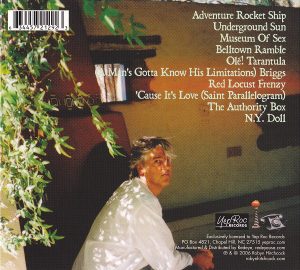 Ole! Tarantula was recorded in Seattle, which clearly inspired Robyn’s second greatest song about that city — after “Viva! Sea-Tac,” because come on — the perfectly-named “Belltown Ramble.”

With drummer Bill Rielfin playing his toms throughout — eschewing any kind of driving beat — “Belltown Ramble” musically invokes the meandering that Robyn describes in the song. Basically, Belltown is a section of Seattle in between the Pike Place Market and the Space Needle — whom, as we learned in “Viva! Sea-Tac”, is such a nice guy — and I’m pretty sure I’ve wandered around down there myself at least once. Though, of course, not the way that Robyn did.

So you go down 4th to Blanchard and
To right on Roq la Rue
Past the Crocodile
Then you slide down 4th again
Where the Claremont used to be
C-L-A R.E.M. O-N-T

In a lot of ways, “Belltown Ramble” is close to one of Robyn’s stream-of-consciousness stories — as he’s wandering through Seattle he runs into a Uzbek warlord named Tamerlane, as well as “7 men” who have names like Greed, Ignorance, Opportunism, etc — but always comes back to the chorus.

And you wanna know what is
And also what is not
Don’t you girl?
It’s an independent life
And you want to see your eyes
Reflected in the world

And honestly, “Belltown Ramble” is one of those Robyn Hitchcock songs that I always loved without really knowing hardly any of the words, and that’s Scott McCaughey’s fault. McCaughey is playing an utterly masterful piano hook, which dances around the rest of the song like a fairy that only Robyn has made the deal to see but has also somehow been able to share with us.

It’s just a brilliant part, and is what got me into “Belltown Ramble” in the first place, and even now, it’s what i’m listening to while I write about it.