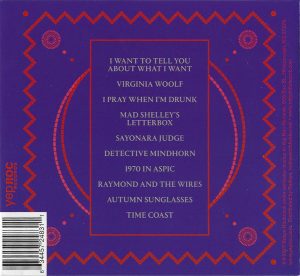 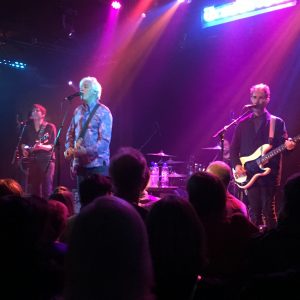 Which, of course, isn’t surprising: given that he has 21 official studio albums as a solo artist, plus nearly that many compilations and live albums, he’s got hundreds of songs at his disposal. So I went into it not hoping for anything (OK, maybe “Madonna of The Wasps,” because c’mon!), and enjoying every single second.

It, of course, would be a great segue to say that one of the songs he played that night was “Time Coast,” the final song from Robyn Hitchcock. But that isn’t the case.

Which is too bad, because “Time Coast” is a song tailor-made for live performance, kicking off with a chugging guitar riff, and featuring psychedelic curlicue leads over nearly the entire thing.

And if you’ve been paying attention at all for the past couple of months, you’ll know that I’m an absolute sucker for the way he holds out “tiiiiiiiiiiiimmmmmmmmmmmmmmmeeee” with help again from Emma Swift and Pat Sansone as drummer John Radford does a disorienting double backbeat on his times. It’s beautiful, catchy and psychedelic.

In other words, peak Robyn Hitchcock. Oh, and on Twitter, as we were discussing our favorite Robyn Hitchcock songs, Hunter told me that Robyn had tweeted that this song is about the same beach he wrote “Airscape” about. So there’s there’s that, too.

This is the final Robyn Hitchcock post — well, until I get to the Soft Boys — and he is probably the most obscure artist that I’m going to go this deep on in the entire Certain Songs project. I’m hoping that those of you who love him enjoyed it, and those of you who didn’t really know him discovered some songs you loved.