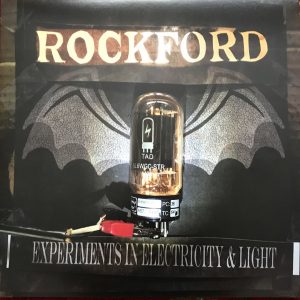 That guy was Jeff Beals, one of the singer/songwriters in Rockford, but that’s not how I knew him at that time. Instead, I had known him from his band Eggplant, with whom Sedan Delivery had played a couple of shows in 1989 & 1990. We’d developed a mutual admiration society around the Dream Syndicate’s “Halloween,” — as you do — and at least once, we opened the night with “Halloween” and they closed the night with “Halloween,” which I found awesome.

In any event, we chatted — I told him that Sedan Delivery had recently reunited, with the aim of finally recording a record — and after the show, Jeff made sure that I got a copy of Rockford’s Experiments in Electricity & Light album, which had come out the year previously, but was new to me, which was all that mattered.

That album opens with “Many Things” with the guitars of Beals and Jon Melkerson — who have been playing together since they were 17 — winding around an almost latin beat from drummer Ed Huerta, as Melkerson sings the first verse & chorus.

Naturally, Jeff and I became friends on Facebook, and he was gracious enough to answer some of my questions about “Many Things,” which he called an older song, inspired by a time in his life where he was working a long ways from his family, and living by himself.

But I’m also going to read it as an indie-rock lifer song, which he clearly is — and I guess I am too — especially after the guitars kick into indie-rock crunch mode and he starts singing about his indie-rock past.

I used to be inside the Final Tour Guides
But I quit the band
But if you asked them
They would say that they kicked me out
(Oh we kicked him out!)

By this time, the other guys are singing exquisite “la-la-la-las” behind him, and break only to harmonize on the second chorus, and pick right back up as Huerta preaches the following sermon.

And of course, that’s the thing, isn’t it? I know that there are dozens, hundreds, thousands of cool bands that I will never hear, especially as I’m this far on the other side of 50. I’m sure Jeff knows ones that I don’t. And I’m sure I know ones that he doesn’t. And we both play in ones that most people don’t. That’s just the way it is.

By the end, “Many Things” has worked itself up into fever pitch, Huerta leading a short drum-filled break, before Beals finds himself walking around after dark, wishing for an amp that he could turn up to 11, even though he knows that he could just make 10 the loudest one.

When Eggplant first met Sedan Delivery way back in 1989, I’m sure both bands were dreaming big about the future — I know I was — but as 2020 crashes into 2021, the expectations are much lower. Life and reality have a way of doing that, even before this no-good very bad year. Of course there are still expectations. But they’re simpler: write some songs with your mates, release them, try to play some gigs, get people to hear your songs. Not so different from 30 years ago, but on a smaller scale. And hell, maybe you’ll stumble across a song that people will still be singing after you’re gone. Maybe you already have, who knows?

One thing I know for sure: it’s hard to give up making music in a band once the bug bites you. I mean, I quit for a quarter-century. I was out. I was done. I sold my drums.

I was lying to myself. And once I told myself the truth, bought some new drums, and we got back together, I felt better about, well, everything. Now, I want to do it until I can’t. And maybe even a little bit afterwards.