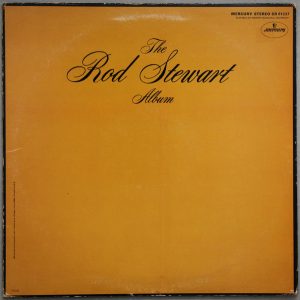 Said solo debut was recorded in the late summer of 1969 with Wood on guitar & bass, Martin Quittendon on acoustic guitar, and Mickey Waller on drums. This core quartet — plus many many guests — would fuel four of the greatest albums in rock and roll history.

But nobody knew that was going to happen in late 1969: after all, Stewart’s pre-Beck solo singles were mostly undistinguished blues, pop or blues-pop. And while the Beck albums were heavy riff-oriented blues rock — even if Stewart always seemed somewhat disconnected from the rest of the band — and the Small Faces were psychedelic brit-pop whimsy.

As it turned out, Stewart’s solo debut — debuting in the U.S in late 1969 as The Rod Stewart Album and the U.K. in 1970 as An Old Raincoat Won’t Ever Let You Down — wasn’t any of those things. Instead, it was a melange of originals and covers (“Street Fighting Man” wasn’t even a year old, but “Man of Constant Sorrow” went back to 1913) heavy riff songs, folkie laments and even — in the case of “Handbags and Gladrags” — proto power ballads.

“Handbags and Gladrags” was written by Mike D’Abo — who was the lead singer of Manfred Mann for awhile, though I first came across his name as Herod on Jesus Christ Superstar — who also arranged it and played the evocative piano. And, while normally, I’d probably find the arrangement overbearing, especially at the end with the full orchestration, Stewart sings the utter fuck out of it, especially on the choruses.

“Handbags and Gladrags” didn’t really sound like anything else on The Rod Stewart Album, but what it did was kind of serve notice that Stewart would pretty much tackle anything, if he liked the song.

Initially, “Handbags and Gladrags” wasn’t released as a single anywhere, but in 1972 it was issued as one in the U.S., where it stalled out at #42.