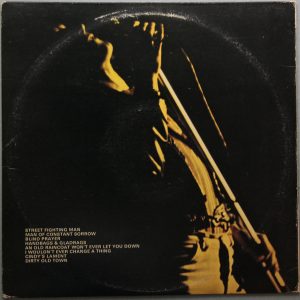 I wouldn’t change a thing if I could live it all again
Ah yeah, haha
Ah listen

That opening is just Rod singing over Ian McLagan’s piano, but it doesn’t really last that long, because almost instantly an organ starts soaring over the busy, chugging, ever-soaring rhythm section of Ron Wood and Mickey Waller, both of which are floating lighter than air. Just like Rod, who crams a lot of words into the first verse, some of which were:

Meanwhile, sticking right there with Rod — practically harmonizing with him — is the organ , played by ::checks notes:: Keith Emerson?

Yup, in the summer of 1969, Keith Emerson was still with his first band, The Nice, and in an interview I found online, Emerson said that Rod Stewart wasn’t even there, but that he mostly jammed with the other musicians because Rod turned up late. Given that Rod has full songwriting credit, I have to assume that Rod Wood, Mickey Waller and Martins Pugh & Quinttendon had already gone though the music with Rod, but who knows?

Obviously, a Rod Stewart session was just a blip on Emerson’s radar, because within a year, he’d team up with Carl Palmer and Greg Lake — who was having a pretty good 1969, as well, — and, well, you know that story.

What happened to the girl that you loved once and left?
Young man, did you break her heart?
Did she live, and did she marry?
Did she ever think on your face again?
Ah, now hold on a minute

As great as Emerson’s cameo was, it was neither the greatest nor weirdest cameo on “I Wouldn’t Ever Change A Thing.” Nope, that would be producer Lou Reizner — the guy who signed Rod to Mercury records for the price of a sports car — who duetted with Rod on the second verse. By this time, “I Wouldn’t Ever Change a Thing” has built and built and built to its first climax, and then dropped back down for the second chorus.

Then as the organ and piano play off of each other, and Wood and Waller play a straight rhythm, Wood leading the charge with some cool bass as Reizner bounces from speaker to speaker with each couplet.

You know my tongue gets tired
When I think back on all of the things we do
But I wonder if I’ll remember these few precious things
As years pass me by
Ah, when young bodies that grown older
And minds become dimmer
I’ll point the finger back in time
I said I wouldn’t change a thing if I could
If I could, if I could live it all again, yeah

“I Wouldn’t Ever Change a Thing” wasn’t a single, or even a cut on Rod’s first album that seems to get a lot of attention, but it’s probably my second favorite Rod Stewart song.

“I Wouldn’t Ever Change a Thing”