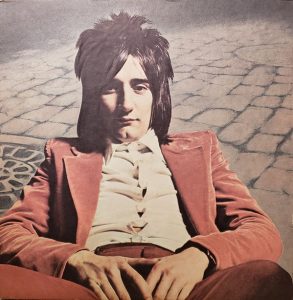 But by that time, his crack band has completely set the mood: starting off with some big Martin Quittendon & Ron Wood acoustic guitars, Mickey Waller’s even drums, and Dick Powell’s violin noodling around the edges, just waiting for Stewart to start telling us a timeless tale.

This happens every day, right? Dudes race to determine who is going to marry somebody. OK, well maybe not. In any event, while we don’t have any backstory as to why this race is taking place at all, we do know that Miss Lucy has a rooting interest on the outcome.

But it’s after each chorus where “Cut Across Shorty” utterly kills it. Quittendon and Wood hit their acoustic guitar chords and leave them hanging while Mick Waller does this amazing thing where he smashes his cymbal with his snare and then does a double backbeat without seeming to hit either his hi-hat or ride, and the overall effect is that of complete and utter suspense, especially since it doesn’t look good for our protagonist.

After the second chorus, Dick Powell takes a long violin solo, which eventually leads us straight to the climatic verse.

But Shorty wasn’t worried
There was a smile upon his face
‘Cause old Lucy had fixed the race
And just like that old story
About the turtle and the hare, you know that thing
When Danny crossed over the finish line
He found Shorty waiting there

There’s a great moment at the end of this, where Waller bashes his snares building towards a stop-time and as they kick back in someone slaps his acoustic guitar for emphasis.

So a happy ending, punctuated by a long Ronnie Wood guitar solo and Rod howling like a banshee, none of which distracts me from my question. I mean, is everybody OK with the fact that Shorty cheated? Weren’t there judges and an audience? This seems like a big enough deal to have judges and an audience. And if so, couldn’t Dan protest the results? The song basically posits that the cheating was OK because Miss Lucy wanted Shorty to win in the first place. If that’s the case, why even go through the charade of a race at all?

Of course, I’m just taking the piss here: obviously the music and vocals of “Cut Across Shorty” are so beyond great it doesn’t matter if there are, uh, inconsistencies with the story. At least, that’s what Ms. Lucy said.