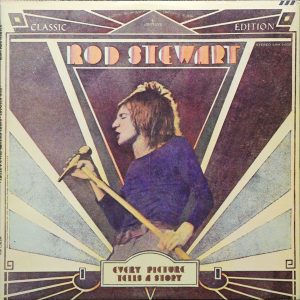 Exactly how “Every Picture Tells A Story” came into my life is a bit fuzzy. I think it was late 1978 or early 1979, and I’d been reading about how Rod Stewart — then the purveyor of ballads like “Tonight’s The Night,” trash-rock like “Hot Legs” and the dread “D’ya Think I’m Sexy” — made a bunch of records in the early 1970s that were totally amazing, and the most amazing was the one that had “Maggie May,” which I’d gotten sick of on the radio years before. At least this was what I read in the Rolling Stone Illustrated History of Rock ‘n’ Roll.

But one day I was at a record store that I didn’t usually go to. I don’t know if I was by myself or with Tim or Craig or Larry. I think it was on Blackstone between Clinton & McKinley, and they were selling a used vinyl copy of Every Picture Tells A Story for $0.50. Fifty cents. I mean, I never ever ever bought used vinyl. But I bought this one.

And soon, I was listening to “Every Picture Tells A Story” every morning before I went to my junior year of high school. Every single morning.

Because at 16, I needed a daily fix of this amazing, incredible song, which after an initial descending acoustic guitar lick, jumped into a tale of a life that seemed so, well, real.

Spent some time feelin’ inferior
Standing in front of my mirror
Combed my hair in a thousand ways
But I came out looking just the same
Daddy said, “Son, you better see the world
I wouldn’t blame you if you wanted to leave
But remember one thing don’t lose your head
To a woman that’ll spend your bread”
So I got out, woo

OK. Alright. First off, Mickey Waller on the drums. He comes crashing in on “spent” and while Rod’s singing the verses, his drumming is nearly indescribable. So let me describe it.

On the first line of every couplet, he’s bashing away. But in between the first and second lines, he’s alternating a straight backbeat with a double backbeat and hitting his cymbals at all the wrong places and doesn’t get back on the beat until the first line of the next couplet.

The upshot of this is to give the initial verses of “Every Picture Tells A Story” a feeling of weightlessness, like they’re continually trying to float off of the ground and being pulled back towards the earth.

In between the verses, though, it’s a completely different thing: when Rod screams “so I got out!!!” it’s just straightforward bashing, while Ronnie Wood starts riffing on his acoustic guitar, setting up a short and narsty tom roll right into Paris, where Rod is having some issues.

Paris was a place you could hide away
If you felt you didn’t fit in
French police wouldn’t give me no peace
They claimed I was a nasty person
Down along the Left Bank minding my own
Was knocked down by a human stampede
Got arrested for inciting a peaceful riot
When all I wanted was a cup of tea
I was accused, woo


It’s at this point where the first electric guitar comes in — a stinging lead from Ron Wood that sets up each of the next two verses: Rome, where he isn’t getting laid and then Peking, where he falls in love with Shanghai Lil, the problematically described “slit-eyed lady” who kinda helps him get his shit together.

Lots of things are happening in this verse. First off, Rod’s got some vocal help now: Maggie Bell from the band Stone The Crows joined on on “claimed that it just ain’t natural“, then as he’s proclaiming how glad he is that he found Shanghai Lil, a piano comes swooping in, as well as more electric guitar and then, as Rod sings “wait a minute” all of the momentum starts crashing down until it’s just Rod, Maggie and an acoustic guitar and my favorite moment in the entire song.

I firmly believe that I didn’t need anyone but me

I sincerely thought I was so complete

Loo-
Look how wrong you can be

Maggie Bell’s harmonies here are exquisite — especially when she sings “com-pleeeeete” — to the point where it might have distracted Rod, who comes in a measure too early on “look how wrong you can be” and then catches himself. And they left it in. They left it in. They didn’t have to leave it in, but it was such a real and human and lovely mistake that it was actually thematically consistent with the lyrics.

After that, it’s a build-up to the coda, with Rod finishing out his story trying to find a moral:

And if they had the words I could tell to you
To help you on the way down the road
I couldn’t quote you no Dickens, Shelley or Keats
‘Cause it’s all been said before
Make the best out of the bad, just laugh it off, ha
You didn’t have to come here anyway

So remember, every picture tells a story, don’t it?

And with that, “Every Picture Tells a Story” switches from something unique on the planet to a straight-out Chuck Berry raver, as the guitars start choogling and everybody starts joining Rod singing “every picture tells a story, don’t it?” with Rod tossing in occasional “wooo!” for good measure.

When I was 16, I really didn’t like this part that much: it seemed so, well, normal, especially after the etherial five minutes that preceded it. But now, I think it’s a necessary catharsis; a joyous way to end this gloriously beautiful travelogue.

“Every Picture Tells a Story”