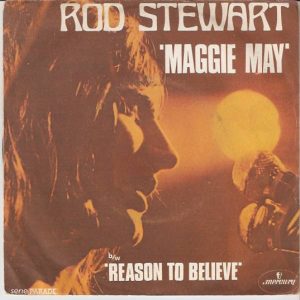 Wake up, Maggie
I think I got something to say to you
It’s late September and
I really should be back at school
I know I keep you amused
But I feel I’m being used
Oh, Maggie, I couldn’t have tried anymore
You led me away from home
Just to save you from being alone
You stole my heart and that’s what really hurts

Heh. I’d started down the path about writing about “Maggie May” from her perspective, but just now I realized that I was stealing from Lester Bangs, who did a whole short story based upon the song that was eventually published in Psychotic Reactions and Carburetor Dung, a book I’ve read enough times to realized that it was a subconscious steal I was doing here, even if what he did was completely different.

Rod Stewart has said that “Maggie May” is based upon the first time he had sex, but the only thing this titanic song seems to in common with that encounter was that the woman involved was much older, as well. The rest is made up. Which is just part of why it’s so amazing, even if you can hear him ripping her heart apart, line by line.

The morning sun, when it’s in your face
Really shows your age
That don’t worry me none
In my eyes, you’re everything
I laughed at all of your jokes
My love you didn’t need to coax
Oh, Maggie, I couldn’t have tried anymore
You led me away from home
Just to save you from being alone
You stole my soul and that’s a pain I can do without

With Ian McLaglan’s organ and Martin Martin Quittenton’s acoustic guitar dominating the lion’s share of the sound, “Maggie May” was a bit of an anomaly for a hit single in 1971: a true folk-rock song. Even Mickey Waller seems subdued, but that might be because the story goes that he showed up to the initial recording session without cymbals, because he would show up to sessions without his own kit, and that day, they didn’t have a kit with cymbals, which were overdubbed later.

I’m just going to say that I never could do that: I don’t want to play — to record — on just any kit: everything needs to be just right.

But the upshot, of course, were drums that just kept “Maggie May” moving forward, as Rod continues to pile it on.

All I needed was a friend
To lend a guiding hand
But you turned into a lover, and mother what a lover!
You wore me out
All you did was wreck my bed
And in the morning kick me in the head
Oh, Maggie, I couldn’t have tried anymore
You led me away from home
‘Cause you didn’t want to be alone
You stole my heart, I couldn’t leave you if I tried

At some point, Ronnie Wood comes in with a guitar solo that is low-key and unobtrusive: like they wanted you to think about what Rod had been singing, and also sets up the final verse where he’s trying to figure out what the fuck he’s even going to do next.

I suppose I could collect my books
And get on back to school
Or steal my daddy’s cue
And make a living out of playing pool
Or find myself a rock & roll band
That needs a helping hand
Oh, Maggie, I wished I’d never seen your face
You made a first-class fool out of me
But I’m as blind as a fool can be
You stole my heart, but I love you anyway

It’s kind of funny that his options are go back to school, become a hustler, or join a band. Nothing at all about, you know, getting a 9-to-5 job. Which, of course, is part of the charm of the guy in the song.

After that, another low-down guitar solo from Wood, and just when you know you’ve got “Maggie May” figured out, it does an absolutely tremendous thing. The whole song breaks down, and in comes the most lovely, heartbroken mandolin solo — played by Ray Jackson — that sound like the tears that both Rod and Maggie would be crying at this point. It’s gorgeous, lyrical, and with the possible exception of the J Mascis guitar solo in “Freak Scene” or Bob Mould’s solo in “Celebrated Summer“, has no peer even all these years later.

“Maggie May” was a massive massive hit single — the first song ever to be #1 in both the U.K. and the U.S. at the same time, I think — and pretty much turned Rod Stewart into Rod Stewart. It was most certainly the first Rod Stewart song I’d ever heard, and as a kid, I kinda got sick of it on the radio. It wasn’t until I could hear it in the context of Every Picture Tells A Story — and distance myself from hearing it all the time — that I could truly grok what an amazing song it is.