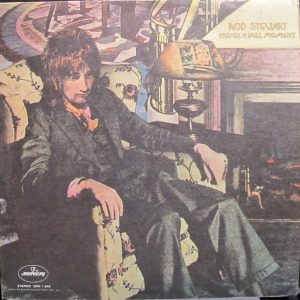 Opening with just acoustic guitars and tambourine, “Lost Paraguayos” is basically Rod in jokey party mode, singing in his most joyous voice.

Darling, I hate to tell you but I think I’m catching a cold
Put another chair on the fire, bring the bottle over here
I feel I’m getting old
I like your laugh and a hot romance
And your orn’ry sense of humor
But if it rains again like it did today
I’m gonna have to leave a little bit sooner
Woo

Of course, eventually Mickey Waller and Ron Wood show up, kicking “Lost Paraguayos” into full gear, Rod occasionally singing “Got to get me some South America sun,” as he tries to get out of the situation that he’s currently in.

Look over there
Oh my God, don’t look now
But it appears to be raining again
Get upstairs, pack my book of prayers
Honey, hurry I’m catching pneumonia
I gotta move while I’m in the mood
Or I’ll disappear into that wall
Darling, please don’t curse

Even though it doesn’t have a chorus, “Lost Paraguayos” has an utterly infectious melody, which pretty much everybody plays — you can hear it in both Ronnie Wood’s bass and his guitars, riding along with Rod. About halfway through, after Rod has basically run out of words — having spent them all in the first half of the song — a horn section shows up and plays the same riff that everybody else is, and the rest of the song is the whole band moving forward on the riff as Rod occasionally interjects “goodbye honey,” but at the same time, he’s already having so much fun, it’s hard to tell if he actually left.