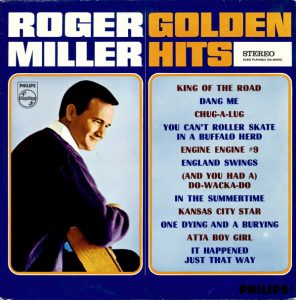 Opening with a big bass part over finger snaps, “King of The Road” rides the median between country and jazz, which helps to account for its eternal classic feeling: it feels could have been written and recorded anytime in the 20th century, but Roger Miller, who was mostly known for novelty songs, plucked it out of the ether and blessed it with one of the most evocative opening verses ever written.

Trailer for sale or rent, rooms to let, fifty cents
No phone, no pool, no pets
I ain’t got no cigarettes

Ah, but, two hours of pushin’ broom
Buys an eight-by-twelve four-bit room
I’m a man of means by no means
King of the road

There’s a lot going on in that first verse: the stop-time at “I ain’t go no cigarettes” is a thing of beauty, as is the internal logic of “eight-by-twelve four-bit room” which maps back to that initial “fifty cents.”. Best of all is “I’m a man of means by no means,” an utterly brilliant bit of wordplay which you barely have time to process because of the stop-time harmonized title that follows up.

I smoke old stogies I have found short, but not too big around
I’m a man of means by no means
King of the road

As that second verse comes in, a honky-tonk piano and even some drums join it, but they never ever break the laconic spell Miller has already created. “King of the Road” knows exactly what it is and what it wants to be, an absolute masterclass in getting more out of less.

And people responded: it was a massive crossover hit that topped the country charts and made it to #4 on the pop charts, to boot. And, of course, it’s become a standard, covered by countless people, like R.E.M., who did a late-night drunken version where Stipe sings “I’m a man of man by no means” that they put on the b-side of “So. Central Rain” just because they could. Hell, I even have a bootlegged Sandinista! outtake that the Clash did as a straightforward cover.

“King of the Road”