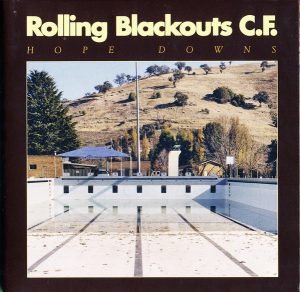 Rolling Blackouts Coastal Fever are an Australian jangly-guitar band who have made two excellent albums and two excellent EPs since 2016, all of which are highly recommended, especially 2020’s Sideways to the New Italy and 2018’s Hope Downs, where their three guitar attack informed song after song, especially the hard-charging “Bellarine.”

“Bellarine” opens with a dual lead guitar salvo over rumbling bass and pounding drums, taking its time before the vocals come in.

Flat line of yellow lights flickering on every street
Cool air off northern water, two years since I’ve seen my daughter
The fish are biting every line but mine
Seems like rum is taking all my time

During that first verse, all of the guitars are in dialog with the vocals, as well as each other, until the whole thing breaks down into a stop time for the chorus.

My Bellarine, from here I shoot my scene
There’s fire in the west, I never did my best

Bellarine is a peninsula near Melbourne, Australia, which I didn’t know until I just now looked it up.

There’s other lyrics, of course, but what puts “Bellarine” over for me is the guitar break in the middle, and the fact that the whole thing sound like a perfect cross between The dB’s and The Feelies, mixing a memorable hook with shit-tons of ringing guitars.