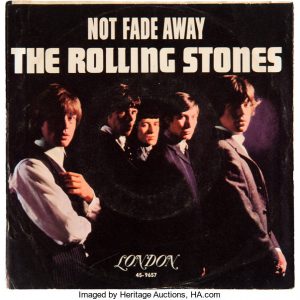 And while we’re at it, one more piece of housekeeping: as you probably know, it wasn’t until Their Satanic Majesties Request in 1967 when a Rolling Stones album in the U.S. matched a Rolling Stones album in the U.K. But unlike the Beatles, the Stones never bothered to retcon their releases until a single unified canon, continuing to re-release their early records in both configurations. (Come to think of it, this might be an Allen Klein deal to maximize sales.) In any event, I’ve made the totally arbitrary call to go with the U.S. configurations and the U.S. release dates as I wend my way through their early era, even if that means listing their first album as the incredibly cheesy England’s Newest Hitmakers instead of the ultra-cool The Rolling Stones.

And while “Not Fade Away” was nowhere to be found on The Rolling Stones, it was track one, side one on Englands Newest Hitmakers. Hello, America! Prepare to have your ass kicked.

“Not Fade Away,” is of course, a Buddy Holly song, and Holly’s version is pretty fucking cool, all things considered, all full of jittery stop-time Bo Diddley beats and Holly’s trademark hiccupy vocals.

And the Stones take all of that and run it over with a truck. Opening with a couple of strums of Keith Richards on 12-string acoustic guitar, almost as a fake, they come roaring out of the gate, Charlie Watts and Bill Wyman in utter lockstep — check out out Wyman finishes the end of each phrase with a little flourish — Brian Jones providing response on his vocals and Mick Jagger invoking The Handclap Rule by clapping his hands furiously on every beat.

Simultaneously ramping up and doubling down on Bo Diddley beat from Holly’s original, “Not Fade Away” is pure energy, flat out rock and roll, without any electric guitars in the mix. At least for awhile: about halfway through, instead of Mick’s vocal, Keith comes out of nowhere with a volley of electric guitar. It’s both surprising and thrilling, and Brian almost sounds surprised as he tries to match the sheer attack of Keith’s lead with his harmonica.

“Not Fade Away” was the Rolling Stones’s first single in the U.S., and despite the fact that the album declared them “Hitmakers,” it wasn’t a hit. Probably a bit too weird and rhythmic and not melodic enough for the U.S. pop audience, where it didn’t even make the top 40. However, in the U.K., where it was their third single, it made it all the way to #3, the first of many many many top ten singles.