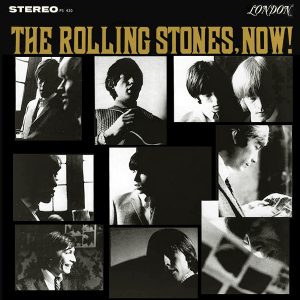 I’m assuming that when London Records decided to start England’s Newest Hitmakers with “Not Fade Away,” they decided that having two songs on the same album featuring the Bo Diddley beat was too much for the kids. Or something. And of course, I doubt that any of the kids who bought The Rolling Stones, Now! back in early 1965 gave a rats ass about any of this — they were just probably glad to get more Stones music, even if one of the songs was a whole year old!

In any event, the Rolling Stones’s version of “Mona” is a gem, featuring Charlie’s minimalist take on the Bo Diddley beat and Keith and Brian setting their guitars to maximum vibrato, visibly shimmering out of the speakers. Add to that Mick shaking the shaker and somebody invoking The Handclap Rule, in the Stones hands, “Mona” is really more of a hypnotic groove than an actual song.

I tell you Mona what I wanna do
I’ll build a house next door to you
Can I see you sometimes?
We can blow kisses through the blinds
Yeah can I out come out on the front
And listen to my heart go bumpety bump
I need you baby that’s no lie
Without your love I’d surely die

But what a groove: deep and dark, sick and dirty, assured and relentless, with Mick’s vocals and Keith’s lead — sometimes talking back and forth, sometimes not — trying to float to the top, but instead also getting caught up in the flow of the rest of the band. It’s easily one of the greatest Bo Diddley covers anybody ever recorded, and I’m also guessing it was a major inspiration for Johnny Marr’s guitar riff in “How Soon Is Now?”