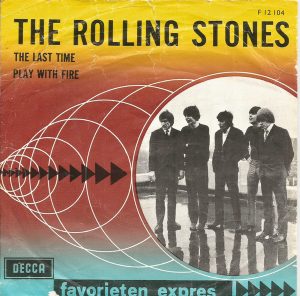 “The Last Time” opens up with a clarion call of a riff — played by Brian Jones — under which you can hear a couple of strums of an acoustic guitar and a tambourine as well as Bill & Charlie’s straight-up rhythms. But, of course, all you’re really hearing is that riff, burrowing into the back of your skull, until Mick starts singing.

Check out Keith’s backing vocals (unless, of course, they’re Mick being overdubbed), as he comes in at the end of each line, emphasizing that Mick told her twice, she didn’t listen to his advice, etc. Either way, the backing vocals on each line just add an extra bit of power, a bit of emphasis to Mick’s reasons why he’s ending the relationship.

Then for the chorus, everything — but the driving rhythms — changes up: Brian stops playing the central riff, and guitars start jangling around each other, as Mick and Keith sing:

And, especially on the radio, that “maybe the last time / I don’t knoowwwwwwwwwwww” sounded so fucking huge, just utterly massive. Like, if they didn’t know, nobody was ever going to find out.

After the second chorus, Keith plays yet another one of his cool disjointed solos, alternating big chords and quick licks, always weaving around Brian’s insistent riff, playing notes when you expect spaces and nothing when you expect notes. All of this eventually sets up the final verse.

Well I told you once and I told you twice
That someone will have to pay the price
But here’s a chance to change your mind
Because I’ll be gone a long, long time

The odds are, of course, that she didn’t change her mind, and that was that, and you would be excused if you assumed that “The Last Time” was just gonna repeat itself until it ended. But it didn’t.

Instead, after the last chorus, it comes to a near dead stop, with only Jack Nitzsche’s — the connection between Phil Spector, The Rolling Stones and Neil Young — tambourine providing the beat, as Brian nudges the song into its coda, which is basically Keith (and Mick?) singing “the last time” over and over and over while Mick (and Keith?) gets more and more amped up screaming “no no no more” against it until the fade. It’s kinda unhinged and totally fantastic.

In the U.K., where the Rolling Stones’s imperial phase had already started, “The Last Time” was their third straight #1 — following “Little Red Rooster” and “It’s All Over Now” and in the U.S, it made it as high as #9, but more importantly to me, it was stuck on the U.S. version of Out of Our Heads, the first unmistakably great Rolling Stones album, and my favorite album of their early period.

Oh, and a hat tip to Austin Tim who reminded me after I posted this that a sample of the Andrew Loog Oldham Orchestra’s version of “The Last Time” formed the basis for future Certain Song “Bitter Sweet Symphony” by The Verve. We’ll talk about all that when I get there, but the bare bones is that the evil Allen Klein finagled all of the publishing rights away from The Verve’s Richard Ashcroft, an injustice was wasn’t rectified until 2019 when Mick and Keith signed all of their publishing rights to the song over to Ashcroft.

And finally, according to Bill Wyman’s Stone Alone book, “The Last Time” was the song that they were playing when a teenage riot broke out during their only trip to Fresno, a show at Ratcliffe Stadium that was only attended by 4,000 people — though I bet you can find 100,000 Boomers in the Fresno area who went — and wasn’t one of those stories I heard growing up, like the infamous “Zeppelin booed off the stage” story that always went around. Anyways, a few years ago, Channel 30 Action News did a piece on it, which I’ve linked to below.


“The Last Time” by The Andrew Loog Oldham Orchestra