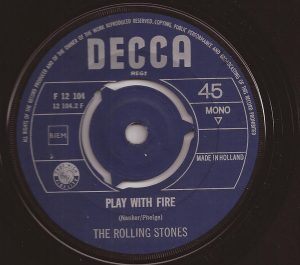 “Play With Fire” opens with Keith playing a quiet acoustic guitar, over which a tambourine-hitting Mick sings about an object of his affection that he’s not too sure about.

Well, you’ve got your diamonds and you’ve got your pretty clothes
And the chauffeur drives your car
You let everybody know
But don’t play with me, cause you’re playing with fire

At that point, a spooky harpsichord comes in, the great Jack Nitzche, providing the main musical hook, as it wanders away between verses.

Your mother she’s an heiress, owns a block in Saint John’s Wood
And your father’d be there with her
If he only could
But don’t play with me, because you’re playing with fire

By this time, of course, the Stones were one of the toasts of London, hanging out with some of the young and rich folks in the London nightlife, who no doubt saw the Stones as a pathway to experiment with the seedier sides of life, and “Play With Fire” stands as both Mick enjoying the attention while issuing a warning: fuck with me, and you’ll get burnt.

Your old man took her diamond’s and tiaras by the score
Now she gets her kicks in Stepney
Not in Knightsbridge anymore
So don’t play with me, because you’re playing with fire

Obviously, I didn’t know what the difference between Stephney and Knightsbridge were, but I absolutely loved the quiet menace at the heart of “Play With Fire,” — especially the calm, detached tone that Mick took as he was singing it — which just made it seem all that much more real.

Now you’ve got some diamonds and you will have some others
But you’d better watch your step, girl
Or start living with your mother
So don’t play with me, cause you’re playing with fire

There is a level of confidence in “Play With Fire” that is just staggering: it’s a complete departure from anything they’d previously done, and the fact that 3/5 of the Stones weren’t even on it didn’t detract from just how on-brand it still was. Yes, the Rolling Stones were still very much a group, but at the same “Play With Fire” was definitely a flex by their songwriters as to just who the leaders were.

“Play With Fire” was the b-side to “The Last Time,” making it their best b-side to date: such a great song that it actually made the Billboard charts — albeit only to 96 — on the strength of its own merits. It was also at the heart of side two of the U.S. Out of Our Heads, which was nearly all original compositions and — completely related — the best Stones album side to date of their early period.