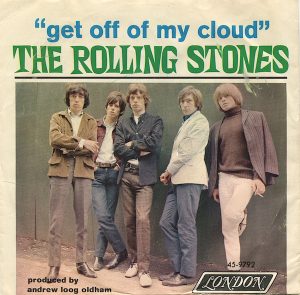 And in fact, “Get Off Of My Cloud” opens with that beat: Charlie’s boom-buh, boom-buh-buh, boom-buh, buddle-duddle-buh-buh before the guitars even come in, Keith playing rhythm against the beat, Brian circling making honking noises with his 12-string.

I live on an apartment
On the ninety-ninth floor of my block
And I sit at home looking out the window
Imagining the world has stopped
Then in flies a guy
Who’s all dressed up just like the Union Jack
And says, I’ve won five pounds
If I have his kind of detergent pack

It’s all kind of disorienting, which is part of the point, but also — unfortunately — a result of what is kind of a thin sound, probably the result of Andrew Loog Oldham insisting they get a follow-up out there now, but actually, all of the songs recorded in Hollywood in September of 1965 suffer from that issue.

Which, of course, didn’t matter as much in the Autumn of 1965 when “Get Off Of My Cloud” would be blasting from tinny transistor and car radios where the call-and-response chorus sounded great, thank you very much.

With Charlie switching up to a straight double-time, somebody (probably Mick) invoking the Handclap Rule and the insistent “Hey (HEY), You (YOU)”, it was utterly irresistible and stuck in your head instantly. What a fun way to tell the entire world to go fuck itself!

The telephone is ringing
I say, “Hi, it’s me, who is it there on the line?”
A voice says, “Hi, hello, how are you?”
Well, I guess I’m doing fine
It’s three a.m., there’s too much noise
Don’t you people ever want to go to bed
Because you feel so good
Do you have to drive me out of my head

One of the cool things about “Get Off Of My Cloud” is after establishing the template of Charlie’s drumbeat and Keith’s rhythm, they start fucking with it as the song progresses: Charlie starts adding and subtracting snare beats from the pattern he set up, and there’s a great moment just before the second chorus where Keith just slashes at his guitar.

Which you probably notice because there aren’t any solos in “Get Off Of My Cloud” or any kind of breaks at all; absolutely no release from the tension they established at the very beginning, which is paralleled by the lyrics, the final verse of which finds Mick trying to escape his 99th floor apartment for what passes for the “real world:” driving around in a car.

I was sick and tired, fed up with this
And decided to take a drive downtown
It was so very quiet and peaceful
There was nobody, not a soul around
I laid myself out
I was so tired and I started to dream
In the morning the parking tickets were just like a flag
Stuck on my windscreen

“Get Off Of My Cloud” wasn’t quite the smash that “(I Can’t Get No) Satisfaction” was, but it was pretty fucking close: topping both the U.S. and U.K. charts, and establishing that the Rolling Stones were going to be a pop juggernaut in the U.S in the same way they had already established in the U.K. (where it was their 5th straight #1, and every single for the rest of the decade would land in the top 10.)

And the scary thing is that they were just beginning to well and truly figure it out.

“Get Off of My Cloud” Official Lyric Video