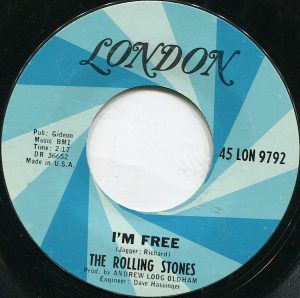 I’m going to choose to believe that they chose “I’m Free” to be the physical flip side of “Get Off of My Cloud” because they wanted to contrast a song about being trapped by stardom with the exact opposite. And they both feel like exaggerations. Or to be more accurate: the A-side is a fever dream and the b-side is a fantasy.

There’s a lot going on musically with “I’m Free:” check out how the guitars — probably both played by Keith — wind around each other, a glorious knot of spidery sound that’s supported by what is probably Brian on organ. In the middle, just after a quiet yet defiant “yeah” from Mick, Keith takes a guitar solo that a lot of people think is shite, but I think is absolutely lovely and adds an extra dimension to the song. As does his falsetto backing vocals.

Then there’s also the stop-time part in the middle of each verse: as Mick and Keith sing “love me, hold me” (which was, er, borrowed from “Eight Days A Week”), Charlie Watts and tambourinist James Alexander do a rat-a-tat-tat-tat stop-time, which not only unexpectedly breaks the song up, but adds even more grandeur to it. Also, after Keith’s guitar solo, there’s a bit where somebody — I think Charlie — comes in wrong. And they left it in. I love it when they leave the mistakes in.

So hold me, love me
Love me, hold me
I’m free any old time to get what I want, yes I am

“I’m Free” is one of those Stones songs that has resonated down through the years — obviously the braggadocio of the lyrics is always going to appeal to each new generation of young people, and one of the more successful Stones covers was the jumped-up dancey version done by the Soup Dragons way back in 1990, which I’m guessing that younger generations assume is the original.