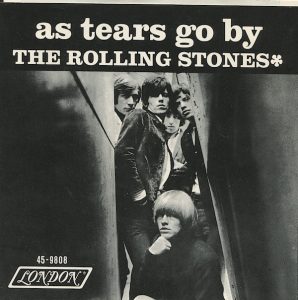 By the time the Rolling Stones their version of “As Tears Go By” as their fourth U.S. single in December, 1965, Faithfull was only a short time away from being Mick Jagger’s partner for the rest of the decade, inspiring — and in one key case — co-writing many upcoming Certain Songs.

So is this a cover version, or not?

One thing is certain: it’s probably the first single of the next period of the Rolling Stones, where they started experimenting with different instruments, different arrangements and different drugs, but of course nobody quite knew that at the time. Instead, they probably thought it was a bit of rip of “Yesterday,” which basically had the same instrumentation: acoustic guitar, vocals and strings, and wondered if the Stones had lost their edge.

What it is, of course, is — along with “Play With Fire” — one of the greatest of the early Rolling Stones ballads, where they would completely drop the pretense of being a hard-charging rock band, aiming for something completely different. As you probably, I’m not really a ballads kind of guy, and when I first heard “As Tears Go By” as a teenager — I think either Joseph or maybe Craig from across the street (or both!) had a copy of Hot Rocks: 1964-1971 — I didn’t like it.

But it eventually wore me down — even though I could take or leave the strings — because of Jagger’s tender vocal and the great melody line. I mean, he so inhabits the person in the song — who has to be decades older — that he almost sounds sincere!

“As Tears Go By” was the fourth U.S. single in 1965 for the Rolling Stones — following “The Last Time,” “(I Can’t Get No) Satisfaction” and “Get Off Of My Cloud” — and while the timing for a melancholy song was perfect, it “only” made it to #6 in the U.S. In the U.K. it wasn’t an A-side, but rather the b-side of the dynamite “19th Nervous Breakdown,” which we’ll discuss further tomorrow.