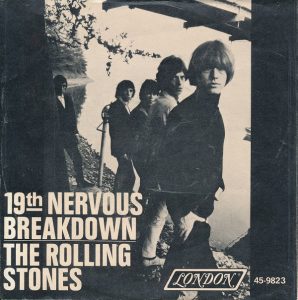 It’s also the first of their songs that showed they’d been listening to what Bob Dylan was creating from what was essentially the same set of roots, as they obviously watched “Like A Rolling Stone” duke it out on the charts with “(I Can’t Get No) Satisfaction,” and no doubt noticed the way he put sophisticated lyrics to unhinged music on Bringing It All Back Home and Highway 61 Revisited, where a song title like “19th Nervous Breakdown” would have fit just fine.

You’re the kind of person
You meet at certain dismal dull affairs
Center of a crowd, talking much too loud
Running up and down the stairs
Well, it seems to me that you have seen too much in too few years
And though you’ve tried you just can’t hide
Your eyes are edged with tears

But wait, but wait, but wait. Time out. Before we get to that first verse, we should talk about the opening of “19th Nervous Breakdown,” shouldn’t we? Because Keith and Brian totally kill it. First thing we hear is Keith’s bright, sharp guitar riff: boo-bah-boo-dah, booda-bah-boo-dah and Brian comes in beneath him with boo-dah, boo-dah, boo-dah-dah-doo-dah and it’s totally and utterly sublime, even as Charlie ushers in that first verse with a ferocious tom roll.

As Mick sings the first verse, Keith switches from the lead riff and slashes at his guitar in such a way that he and Brian are basically creating their own wall of sound while Charlie rides his, er, ride cymbal like a maniac as they barrel into the chorus.

Every single moment of that chorus totally and utterly kills. First, they way they all stop for a second when Mick sings “look around,” followed by Keith making his guitar bend around itself. Then check out Charlie’s tom rolls after the “here it comes,” and Keith’s harmonies on both “here it comes” and “here comes your 19th nervous breakdown.”

After setting up the song, they’re off to the races: the guitar choogle and changle, Keith sings or he doesn’t depending on how he feels, and there’s even an ironic moment in here where the future tax exiles make fun of rich people who own a lot of tax.

And then there’s a bridge. This is what, like, the tenth Stones song I’ve written about, and this is the first time they’ve decided to put in a bridge. I think. A fucking killer bridge, coming out of nowhere and taking no prisoners.

Oh, who’s to blame, that girl’s just insane
Well nothing I do don’t seem to work
It only seems to make matters worse
Oh pleeeeeeeeeeeeease

I mean, Keith’s harmonies would be good enough on “girl’s just insane,” but then when they all drop out except Keith’s guitar and Mick’s vocals on “well nothing I do don’t seem to work / it only seems to make matters work” only to be brought back by Charlie’s drums, it’s literally one of the greatest moments in the the entire Stones catalog, with Keith’s guitar literally dancing out of the speakers, setting up the dynamite final verse.

Like many Stones songs to come, “19th Nervous Breakdown” is both a breakup song and a drugs song, unless you want to interpret the “trip” that Mick is singing about as a road trip he took with soon-to-be-ex-girlfriend, Chrissie Shrimpton, which, yeah right. You’ll notice that “19th Nervous Breakdown” is once again about a upper-class girl, like “Play With Fire” and “As Tears Go By,” because Mick Jagger was kinda of obsessed with money, and people who have it.

Meanwhile, they’re having so much fun playing “19th Nervous Breakdown,” it just kept going and going: after the third verse, there’s another breakdown with just Keith and Brian’s guitar, and they go into the bridge again, and repeat the second verse, neither of which — strictly speaking — was needed, and helped stretch “19th Nervous Breakdown” to nearly four glorious minutes, climaxing with yet another killer coda.

After one final guitar breakdown — Keith still finding new things to play — Mick and Keith sing “here comes your 19th nervous breakdown” over and over while Bill Wyman slides his fingers up his bass, making dive-bombing noises which simulate the nervous breakdown, while Charlie does killer drumrolls underneath him. It’s a tremendous ending to a tremendous song, easily my favorite of their singles before “Jumpin’ Jack Flash.”

That said, “19th Nervous Breakdown” was the first Rolling Stones single not to go to number 1 in the U.K. since “Not Fade Away” two years prior. It also stalled out at #2 on the Billboard charts, where actually topping the charts wasn’t nearly as guaranteed as it seemed to be in the U.K.