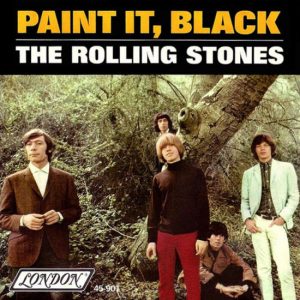 So fast forward to the summer of 1987, and I’d just been through the wringer watching Stanley Kubrick’s Full Metal Jacket at one of the local movie theatres, and as the credits came up, the familiar opening licks of “Paint It Black” came up, and then suddenly Charlie’s kick-tom-snare pattern came thundering in, and it totally fucking blew me away.

Maybe it was the dubly sound of the theatre, maybe it was the fact that Kubrick used the mono version where the drums are straight down the middle, but for the first time ever, I got “Paint It Black.”

I see a red door and I want it painted black
No colours anymore, I want them to turn black
I see the girls walk by dressed in their summer clothes
I have to turn my head until my darkness goes

Aftermath, of course, was the first Rolling Stones album where all of the songs were written by Mick Jagger and Keith Richards, and just for that, it would have been a milestone, but it’s also the first album where they started experimenting with different instrumental textures, mostly played by Brian Jones, who alternated between not contributing materially to a song and providing an absolutely necessary instrumental hook.

In the case of “Paint It Black,” it’s the sitar, which harmonizes with Mick Jagger on the verses, complimenting Charlie’s furious beat — which alternated tom-driven doubletimes at the beginning of each verse with a more straightforward beat at the end — and allowing Keith to support Charlie with an acoustic guitar and paint even more atmosphere with an electric guitar. All of this in service of a song that’s about depression.

I see a line of cars and they’re all painted black
With flowers and my love, both never to come back
I see people turn their heads and quickly look away
Like a newborn baby, it just happens every day

Whether or not “Paint It Black” was a cry for help, like “Help,” it was kind of the culmination of the darkness that Rolling Stones had cultivated in mid-60s run of singles: “(I Can’t Get No) Satisfaction,” “Get Off Of My Cloud,” “As Tears Go By,” “19th Nervous Breakdown” and now “Paint It Black?” That’s some serious shit, even if Mick tended to downplay the importance of his lyrics.

I look inside myself and see my heart is black
I see my red door, I must have it painted black
Maybe then I’ll fade away and not have to face the facts
It’s not easy facing up when your whole world is black

Either way, Mick does a cool vocal thing on “Paint It Black,” too: on each verse, he sings the first two lines calmly and magisterially as Brian doubles him on the sitar, and then as Charlie switches the beat up and the sitar disappears, replaced by the guitar, he sings in a more conventional rock voice.

For the fourth verse, the whole song breaks down to just Mick and Brian.

And then Charlie Watts starts the song back up with the coolest fucking thing: rather than a conventional drum roll — like he’d been playing throughout the song — he staccatoly hit his snare, cymbal, tom, hi-hat, hi-hat, hi-hat, tom, and they’re back to the races. It’s one of my all time favorite Charlie Watts moments.

After that, Mick uses his rock voice for the rest of the track, as he reprises the first verse and then he and Keith start humming the melody line, accompanied by the sitar, doubletime drums, Bill sliding up and down his bass (and adding extra bottom by playing organ pedals to boot) while Keith’s acoustic is doing a bolero and his electric is circling like a vulture. It’s a remarkable moment of near-chaos, after which Mick screams:

It’s a remarkable production, and they were rewarded for it: “Paint it Black” was the third Stones single to top the charts in both the U.S. and U.K., and London Records stuck it at the beginning of the U.S. album version of Aftermath, because of course they did.