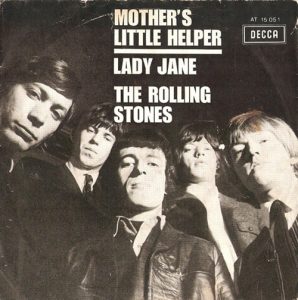 “Mother’s Little Helper” famously (or infamously, 55 years later) opens with 22-year-old Mick Jagger intoning “what a drag it is getting old” over an acoustic guitar jangle from Keith Richards which, as the band kicks in, turns into a wallop of feedback as the song kicks into gear with what was an increasingly rare occurrence on a Rolling Stones song: a Brian Jones guitar hook.

Well, technically, Brian and Keith, who team up on a quasi-exotic figure using 12-string guitars, which was just weird enough to distract from the fact that “Mother’s Little Helper” was a half-country, half-folk song — more acoustic than electric, come to think of it — with satiric lyrics, this time in the mode of Ray Davies.

“Kids are different today,” I hear every mother say
Mother needs something today to calm her down
And though she’s not really ill, there’s a little yellow pill

She goes running for the shelter of her mother’s little helper
And it helps her on her way, gets her through her busy day

That was one of the things about the Rolling Stones in the mid-1960s: they would steal from their peers — the Beatles, Kinks and Dylan, mostly — but by the time the song came out through the Stonesmogrifier, it sounded like them.

“Things are different today”, I hear every mother say
Cooking fresh food for a husband’s just a drag
So she buys an instant cake and she burns a frozen steak

And goes running for the shelter of her mother’s little helper
And two help her on her way, get her through her busy day

Of course, a big part of what made the Stonemogrifier so efficient was that nobody the Stones stole from had a rhythm section that was as deadly with a groove as Charlie Watts and Bill Wyman. And so Charlie’s snare anchored “Mother’s Little Helper” giving Bill the freedom to play all around it, getting a big fuzzy bass sound that acted like a rhythm guitar, and then breaking down with Charlie as Mick sang “running for the shelter of her mother’s little helper.” Oh, and check out how Charlie accents that stop-time a little differently each time, stumbling and stuttering like a pilled-out mom, but always coming back on the beat.

Meanwhile, Mick shoulders more of the vocals than you’d normally expect until the bridge, wherein Keith comes with some twangy harmonies.

Doctor, please, some more of these
Outside the door, she took four more
What a drag it is getting old

My favorite part of “Mother’s Little Helper” is the final verse, which is also the darkest, archest and meanest — and soon enough, the most ironic — verse with Mick scolding about the consequences of all of that drug-taking.

“Life’s just much too hard today”, I hear ev’ry mother say
The pursuit of happiness just seems a bore
And if you take more of those, you will get an overdose

What I’ve always found weird about that verse is the phrase “you will get an overdose,” which has always bumped me, always, because outside of this song, who has ever used the phrase “get an overdose”?? It’s just such a strange way of putting it, I think.

At the end of the song, there’s one more bit of weirdness, as instead of a fade-out, then end the song on a weird chord with Mick and Keith exclaiming “hey,” which Keith has said is something that Bill Wyman came up with (and is also kinda Kinksy, too.)

Nevertheless, “Mother’s Little Helper” was yet another smash hit single in the U.S., making it to #8 on the Billboard charts, though it was probably the weakest of their experimental period singles, which is grading on a really steep curve, I know.