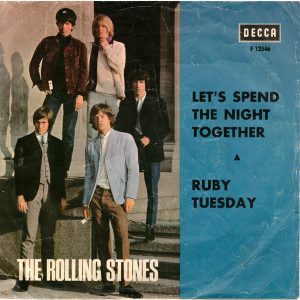 Well, not completely changed, as in January, 1967, Sullivan insisted that Mick Jagger not sing the title of their latest single, the piano-driven fucksong “Let’s Spend The Night Together,” which was yet another departure in their sound, as the Stones were now in full experimentation mode.

And in fact, “Let’s Spend The Night Together” opened the U.S. version of Between The Buttons — the best album from the Stones’s experimental period — with a bang. Starting with hammering piano riffs from both Keith Richards and Jack Nitzche and the insta-hook “bah-da-dah-dup-bop-bop-bop-da-dah-dup” backing vocals, “Let’s Spend the Night Together” kicks into gear the moment Charlie Watts kicks into the double-time drums, alternating those with a straight beat and some brutal snare rolls. Meanwhile, Mick immediately gets to the point.

Obviously, this is dirty as all hell: especially if you — like I always have — heard “tongue’s getting tired” instead of “tongue’s getting tied.” But weirdly enough, the not so coded lyrics about foreplay and oral sex weren’t the problem, but rather the directness of the chorus.

It was all too much for Ed Sullivan, and he insisted that Mick change the lyrics to “let’s spend some time together,” which — complete with money shot of Mick rolling his eyes as he sang it — he did, I guess figuring that 1) the kids all knew the real lyrics and 2) we were a country where a quick fuck in an alley is called “sleeping together,” so maybe “let’s spend the night together” was actually offensive.

And because we were deep into their experimental period, there’s a nice breakdown — Brian Jones goosing it with a massive organ — where the Stones do a quick Beach Boys round seemingly for no other reason than they could, before Charlie resumes the piledriving beat.

However, it happened to be a double A-side, and the song it shared vinyl with was “Ruby Tuesday,” so they definitely got what they needed from this single, in case you were worried.

“Let’s Spend The Night Together”


“Let’s Spend The Night Together” performed on the Ed Sullivan show, 1967


“Let’s Spend The Night Together” performed on Top of The Pops, 1967