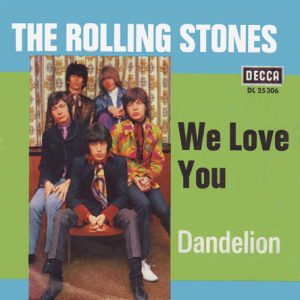 From the start, the Rolling Stones cultivated an outlaw image that truthfully, they kinda had to grow into. Yeah, there were riots at their shows, and yeah there was “we piss anywhere, man” (which might be an apocryphal quote), but it wasn’t until they started singing and talking about taking drugs that the authorities started coming after them hard.

And so, in early 1967, the shit-ass rag The News of The World ran a series with the breathless title “Pop Stars and Drugs: Facts That Will Shock You” of which one of the shocking facts was that they saw Mick Jagger taking speed and smoking hash. Except that it wasn’t Mick Jagger, it was Brian Jones. Whoops! So Jagger sued The News of The World for libel. As you do.

And so it came to pass that on February 12, 1967, a jack-ass police officer who got his jollies arresting musicians knocked on the door of Keith Richards’ country estate, Redlands, and busted Mick and Keith, who had just been on a weekend acid bender. As you do. It turned out that The News of the World had tipped off the cops because of course they had.

By the way: Mick was arrested for five legally purchased — in Italy — pep pills and Keith was arrested for allowing pot smoking in his house. No, really! Not for smoking pot. Not for possession. For allowing other people to smoke pot. There was also a scandal because Marianne Faithfull had come downstairs wearing only a fur rug — probably to make the policemen uncomfortable — which led to one of the greatest of all Keith Richards moments in the trial when the prosecutor asked him if he thought she should be embarrassed for doing that and he responded: “We are not old men. We are not worried about petty morals.”

Both Mick and Keith were convicted, and each spent nights in prison, after which — out for appeal — they recorded the first of their truly psychedelic songs, “We Love You,” which opens with the sound of a prison door slamming, after which is an utterly primal Nicky Hopkins piano riff rolling and tumbling over itself, some cool bass squiggles, and then falsetto voices singing.

And then slowly snaking out of the speakers, spooky fucked-up voices claiming just one thing:

The vocals on “We Love You” are unlike any other song in the Rolling Stones catalog, because helping them with the harmonies were John Lennon and Paul McCartney of another group, called “The Beatles,” who after this, were never heard from again.

These “Beatles” added an otherworldly cast to the vocals throughout, as “ooooooooohs” and “ahhhhhhhhs” drift in and out of the song, which is dominated by a great Brian Jones Mellotron part that sounds like horns being smashed and strangled, some crunchy guitar from Keith, and of course that utterly insistent piano part from Hopkins, who would be adding magic to Stones songs for nearly the next decade.

Of course, Mick being Mick, he couldn’t just come out and sing “fuck tha police, Mick said it with authority”, but there is no doubt to whom lines like “You will never win we / Your uniforms won’t fit we” are aimed at. By that time, Charlie has switched up from a straight drum beat to a classic tom-driven psychedelic beat, which perfectly offsets the madness that “We Love You” drifts into in its minute, as Brian starts strangling the mellotron and Keith starts soloing and the voices of Mick and Keith plus John and Paul from “The Beatles” drift in and out of the rest of the song.

I think that “We Love You” is one of their greatest 60s singles and an absolutely fantastic precursor to their next album, but in the U.K., it was their worst-performing single between 1964-1974, stalling out at #8. In the U.S., where they flipped the single and played the far more accessible and less-political “Dandelion,” it stalled out a #50.

Which is possibly part of the reason that “We Love You” only sporadically appears on compilations, not making any of their U.S. albums until 1972’s More Hot Rocks (Big Hits and Fazed Cookies), and rarely ever since — the big exception being 1989’s massive The Singles Collection box set — making it perhaps their rarest 1960s A-side.

Oh, and when I recorded the sleigh bells for Sedan Delivery’s 2020 “Lockdown Christmas,” I slammed my bathroom door — the bathroom being the best place to get some reverb — shut at the end, in emulation of the prison door sound effect at the beginning of “We Love You,” but it didn’t quite have the effect I was hoping for, and there was much discussion on the band chat as to whether it sounded more like a pistol shot than a door slam. Now that I think of it, I shoulda just sampled it and risked ABKCO adding “Jagger/Richards” to the songwriting credits. It would have totally been worth it!