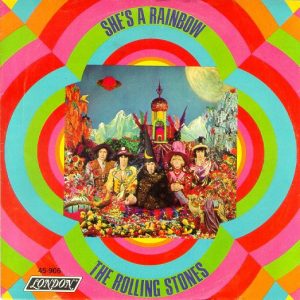 That said, it’s not because they went psychedelic: after all, that was in the air in 1967, and in fact there was a great Stones album to be made from the post Between The Buttons session, they were just too distracted to discover it. But I have, and would like to present Children of The Moon, the Rolling Stones’ alternate universe psychedelic album.

Not only would it be free of the funny but distracting “Satanic Majesties” joke — and you could still keep all of the cover art madness without it — it would also include “Child of The Moon,” the dynamite “Jumpin’ Jack Flash” b-side that had its roots in these sessions.

There were two singles released from Their Satanic Majesties Request: Bill Wyman’s (yes, you read that correctly) shimmery “In Another Land” — which was actually released as a Wyman solo single, probably so they wouldn’t have to put it on any actual Stones greatest hits albums in the future — and the dynamic “She’s A Rainbow.”

Starting off with a seemingly tentative Nicky Hopkins piano part, which is insanely sad and lovely at that same time, “She’s a Rainbow” utterly explodes into its chorus, dominated by a big Charlie Watts beat and an even bigger mellotron hook by Mr. Brian Jones.

This is followed by a couple of speeded-up “ooh-la-la-ooh-la-la-la-la,” before repeating both the piano hook and chorus again. And that’s followed by an extended piano break, accompanied by a string arrangement by a session wizard named John Paul Jones, who was never heard from again.

Until, finally, halfway through the song, we have a verse.

I’m not gonna lie, until just last week, when I watched the lyric video for this, I always thought that Mick was singing “have you seen the lady Pharaoh?” instead of the more romantic and less exotic “have you seen a lady fairer?” Either way, I reserve the right to interpret “she comes in colours” as being capital-D Dirty, and love every single Charlie Watts drum roll that accompanies it.

Near the end, there’s another piano/strings duet, only this time, the strings are fucked-up and disjointed, someone’s banging on what sounds like an upside plastic bucket, and the “ooh-la-la-ooh-la-la-la-la” vocals are also hanging out until one last explosion to the chorus.

It’s a weird, totally fucked-up arrangement, and yet it also somehow works, because the contrast between the piano/strings parts and the band explosions — the non-Rolling Stones vs. the Rolling Stones proper — never cease to bowl me over. However, that unconventional arrangement might have worked against it as a single, as it only made it to #25 in the U.S. and wasn’t released at all as a single in the U.K.