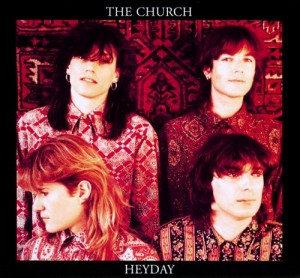 In late 1984, I saw The Church for the first time in concert. Tim & I drove up to San Francisco and we saw them at now-gone Wolfgangs on one of the last shows of their very first U.S> tour. I don’t think Wolfgang’s was very crowded, because we were up front, and even then I never really fought to get right near the stage. But that’s where we were, and it was utterly ferocious.


I have two vivid memories of this show: 1) Drummer Richard Ploog kept looking backstage and smiling at a woman who was holding what was obviously their child and 2) and unbelievable barrage of noisy psychedelic guitar as they went from the pretty “An Interlude” into the cosmic “Travel by Thought.” I would kill to have a bootleg of this show, and it was the best show I saw that year, which includes Bruce Springsteen the very next night.

What this of course meant, was some pretty high expectations for their next album, Heyday, and with “Tantalized,” at least, those expectations were met. As a whole, Heyday added a lot more — especially horns and strings — to their sonic palette, repositioning them less with the Smiths and R.E.M. and more with Echo & The Bunnymen or U2. Or at least that was the league that “Tantalized” was playing in: a huge churning reaching-for-the-sky guitar opening that builds and builds and builds until it totally explodes with Kilbey excitedly (maybe the first time ever) screaming:

God I’ve been asleep so long, I’ve been awayyyyyyyy
Back from software limbo the natives call todayyyyyyy

And then the most gods damned perfect horn part you’ll ever find on an 1980s alt-rock song blasts in totally out of the blue. It killed me the moment I heard it — I remember having an enthusiastic conversation about how awesome it was with Jay in the KFSR studio one of the first times I heard it — and it kills me still.

After that, it doesn’t even matter — the guitars fight against each other, Kilbey tones it down a bit for the chorus and all I’m doing is waiting for that horn part again.

“Tantalized” performed live in 2010 with the George Ellis Orchestra