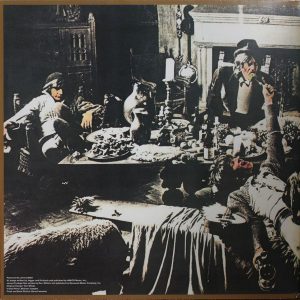 Welp. This is no good. You know how some twitter bios claim that “retweets are not endorsements”?? Well this is like that. There is absolutely nothing redeemable about the sleazy, strutting “Stray Cat Blues,” the lyrics of which are one of Mick Jagger’s greatest provocations, and would probably get him arrested today. Or at least cancelled.

Opening with an “ahhhhh” and an evil laugh, “Stray Cat Blues” jumps instantly into its reprehensible subject.

Oh, but the music. Jesus fucking christ, the music of “Stray Cat Blues.” As Mick has said, it was copped from the Velvet Underground, who knew a little bit about writing about things you shouldn’t be writing about. So accompanying that “ahhh” and evil laugh is a Velvetsy guitar drone and a build to the verse, during which Charlie Watts swishes his hi-hat on every beat but the downbeat, while Keith plays an almost ominous riff over and over, occasionally looking over at Charlie as he does a quick snare roll which goes into the second verse.

Mick’s vocal is a carnival barker sleazy drawl, reveling all of the wrongness of each and every word that comes out of his mouth, especially on the chorus, which he screams in something approximating joy.

Also screaming: Keith’s lead guitar, which fucking explodes into white light white heat shards of electric fire, notes echoing against each other in both speakers, rooting around in the slimly sleaze of the rest of the song, and continuing through the next verse.

You look so weird, and you’re so far from home
Bet you really miss your mother
Don’t look so scared I’m no mad-brained bear
But, but it’s no hanging matter
It’s no capital crime

And then, and then, instead of singing the beginning of the next chorus, Mick Jagger does the most amazing thing, as the guitars are exploding all around him:

The sheer and utter joy of that scream, as if he’s already lost his words, with everything that implies, is so over-the-top, so remarkable, and so fucking wrong, it was clearly completely calculated. All of which makes it my favorite Mick Jagger vocal moment on record, after which we get about five thousand guitars screeching until he finally remembers to exclaim:

By this time, Nicky Hopkins has joined in on the piano, and Brian Jones — who couldn’t be bothered to strap on a guitar, leaving Keith to do all five thousand guitar overdubs — adding atmosphere on a mellotron, both of which you’d be excused from if you hadn’t noticed in all of the other shit happening, especially as Keith keeps the guitar yowling and mewling throughout the final verse and chorus.

You say you got a friend, that she’s wilder than you
Why don’t you bring her upstairs
If she’s so wild then she can join in too
It’s no hanging matter
It’s no capital crime

At the end of the final chorus, just as Mick is singing “bet she never saw you scratch my back,” there’s a breakdown where all five thousand guitars drop away, and we just hear some funky bass from Bill Wyman — who maybe inspired the song? — some congas, probably by Rocky Dijon, and Charlie swishing his hi-hat.

It’s the beginning of a really cool build — not so much with speed, but rather noise — as Hopkins comes in with his piano, Brian Jones with the mellotron, Keith with a swanky rhythm guitar, and then the screeching guitars, as “Stray Cat Blues” (not really a blues), strolls into the fade.

Obviously a song this wrong and salacious was never released as a single, but it was a perfect piece of provocation for their live show, where — at least in the 1969 tour — they slowed it down to a crawl and had Mick Taylor go nuts while Mick made the lyrics somehow even worse. Because of course he did.