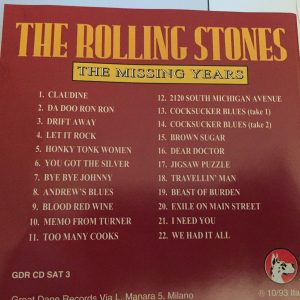 And so instead of playing blackjack Saturday afternoon, I went to the record swap and bought not just The Missing Years, but a disc of Van Morrison’s legendary 1971 Pacific High Studios performance, and Roma, a recording of one of the final shows from the recently deceased Kurt Cobain. Quite a haul!

But The Missing Years was the star, as it featured performance from across their career, some of which — “Claudine,” “Brown Sugar” with Eric Clapton — have subsequently been released, and some, like their take on Dobie Gray’s “Drift Away” and two versions of the notorious “Cocksucker Blues.”

And “Blood Red Wine,” which it claimed was an Exile on Main St. outttake, but clearly was from the Beggars Banquet sessions, given the acoustic guitar and drum sound. Despite the fact that it was obviously unfinished, “Blood Red Wine” packs both a musical and emotional wallop.

I don’t think there’s any electric guitar on “Blood Red Wine,” which, of course, doesn’t make it all that different from most of the other songs from the Beggars Banquet sessions, but what it does have is a sense of dynamism that reminds me of a song like “Sister Morphine.”

And so, it starts with with Keith playing some lovely sad guitar, like he’s trying to find the right chords — which he may very well be — and eventually, he finds an even sadder lick, over which Mick comes in.

Dear, I love you dearly
But don’t forget trouble I
I used to find
And it was in your mind
Yeah

There is not a chance in hell that these would have been the final lyrics had they continued to develop the song, but it doesn’t even matter Keith strums slightly harder, Nicky Hopkins comes in with the piano, and Charlie rumbles his toms.

I got red blood, and I got blood red wine
Which I bring you, when the snow is heavy on the ground
If you say where go I’ll just, wrap my cloak around

It just struck me today that “Blood Red Wine” is quite possibly a lyrical precursor to future Certain Song “Winter” — recorded only four years but a million decades later — which also has a line about Mick wrapping his coat around someone. In the case of “Blood Red Wine,” it’s probably Marianne Faithfull who inspired the next verse.

You say that every man you ever had
Has been obsessed with you and I, want to prove an exception
To the rule, that you lay down
Babe, please don’t make me cry, because there’s a little pain inside
Yes my darling now you can’t expect me always to hide

It’s so tentative, his phrasing is so weird and off and real and sad and he’s totally making it up on the spot and I love it all so much, especially when they follow it up with another chorus filled with Nicky’s overmodulated piano and Charlies refusal to play anything but his toms. Obviously, the nth-generation bootleg sound has something to do with the whole feel of the track, but also, the melody line of that chorus is as sad and pretty, it just makes the fumbling stumbling verses that much more real.

Yeah, that’s right
You see that every time well the lines must rhyme
And every verse, be in the same old time
Does it all, have to rhyme?
But there go, and that’s a place that you will never
You said to remind me of the girl I used to know, and used to love, yeah

At this point, Charlie finally finds his snare drum, and plays a beat during the final chorus, which has gotten even grander and bigger.

I got red blood, and I got blood red wine
Which I bring you, when the snow lies heavy on the ground
If, you get cold I wrap my, coat, coat around
My, my, my, my don’t you stay, on that, that snowy ground

And yeah, it doesn’t even matter that Mick is rhyming “ground” with “ground,” not now, not with the snow covering everything everywhere forever. Which is how it feels as Charlie makes footprints with his snare drum until it just ends.

It’s too bad they never finished it, because it’s a pretty great song, and in an alternate universe, we coulda had a Beggars Banquet configured like this:

Those of us who are Rolling Stones crazies know two things 1) that there is a shit ton of stuff in the vault we’d love to hear cleaned up and 2) good luck with that. There was Metamorphosis in 1975, and nothing until the Exile on Main Street reissue in 2010, which — outside of “Plundered My Soul,” was underwhelming. Same goes for the Sticky Fingers reissue in 2015. The only time they ever nailed it was with the bonus disc of the 2011 Some Girls reissue — too bad the remastered album itself sounded like shite.

It’s all because, even pushing 80, Mick Jagger only ever looks in one direction: forward. He doesn’t care if we want to hear the outtakes, which is admirable in its own way, of course, if frustrating.