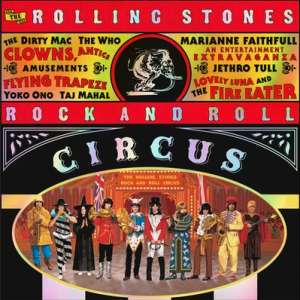 Conceived by Mick Jagger & filmmaker Michael Lindsay Hogg as a way to promote Beggars Banquet, the Rolling Stones Rock and Roll Circus was just a legend for nearly three decades. While it was recorded on December 11, 1968, it wasn’t released until 1996, despite the fact that it had performances by Jethro Tull (who mimed “Song For Jeffrey” with fill-in guitarist Tony Iommi,) The Who and a supergroup consisting of John Lennon, Mitch Mitchell, Eric Clapton & Keith Richards doing “Yer Blues.”

The first time I ever heard of it, of course, was the first time I saw The Kids Are Alright, in a theater in Fresno in 1979, thrilling to not just Keith Richards — decked out in a top hat and an eyepatch — introing them with “dig The Who,” which led into utterly incendiary performance of “A Quick One While He’s Away.” I’ll get to that when I get to The Who in, say, 2024, but in the meantime, the story went that the Stones didn’t want to release it in 1969 because they were basically blown off the stage by The Who.

Which both is and isn’t true, because by that time, The Rolling Stones were essentially a four-piece, Brian Jones there but not really there, and given that he was tossed from the band and then died before they could get the film out most likely put the kibosh on the whole project as Mick moved restlessly forward. And as far as their set goes, it’s also true that while the filming for the Rock and Roll Circus started at 2:00PM, various production gremlins kept the Stones from starting their set until 5:00AM the next morning, which is a difficult time to get revved no matter how great the coke is.

That said, The Rolling Stones Rock and Roll Circus was both the live debut of a few classic songs — “Jumpin’ Jack Flash,” “Sympathy For The Devil,” “You Can’t Always Get What You Want” (sans choir, of course) — as well as “Parachute Woman.” And it did literally have the very final significant contribution Brian Jones ever made to the Rolling Stones, his slide guitar on the live version of “No Expectations,” the beyond gorgeous country-folk ballad that had the misfortune to follow “Sympathy For The Devil” on Beggars Banquet.

Recast for the entire band to play in a live setting, “No Expectations” loses none of its beauty, and Brian is on point from the start, bending around the song’s melody from the very start, and even taking a bit of solo in the middle, accompanied by some gorgeous piano from Nicky Hopkins.

Our love was like the water
That splashes on a stone
Our love is like our music
It’s here, and then it’s gone

In a weird way, “No Expectations” was a nice bookend for Brian Jones — I mean “nice” in a relative way, since the whole fucking thing was a tragedy — since he came into the Stones as a hotshot slide guitar player, and that’s how he left them.

At the end, Mick basically hums the melody line as both Brian and Nicky continue their lovely interplay over Keith’s acoustic, Bill’s bass and Charlie’s quietly simple drums. And when it’s done, Brian, who was so here for the four minutes of the song, is once again gone.

“No Expectations” at the Rolling Stones Rock and Roll Circus, 1968