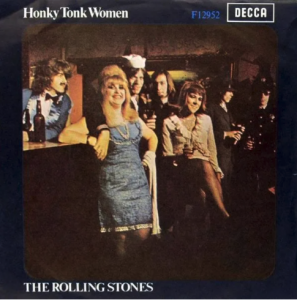 But of course, we’re getting ahead of ourselves here, because I should spare a few words for the opening of “Honky Tonk Women,” which remains one of the most insidious openings of any pop single ever. The first thing you hear, of course, is genius producer Jimmy Miller tinkling on a cowbell, followed by Charlie Watts coming in on a beat that doesn’t even exist, stuttering his kick drum around like a drunk leaving a honky tonk. And just when the whole thing might be heading for disaster, Keith steps in, splitting the difference, and both Watts and Miller instantly reorganize themselves around him, providing a unique but totally solid foundation for Mick Jagger to spit out the first verse.

Mick’s singing around the beat here, his phrasing playing hide-and-seek with the already established rhythms: what’s amazing is that everybody is continually creating space for everybody else, creating a stop-and-start frisson in the verses that not even the Stones could ever match again. And, of course, totally goes away when they go into the chorus, as Mick Taylor and Bill Wyman come in and Charlie plays a straight kick pattern.

And while Keith had come in on the “I just can’t seem to drink you off my mind,” he and Mick are now joined by a bunch of backing vocalists — Reparata & The Delrons, Doris Try and Nanette Workman — as Mick Taylor winds curlicue hooks around the whole thing, instantly integrating into a band he’d just joined. After the massive chorus, they go back down to bare-bones mode for the second verse.

“Honky Tonk Women” was one of those Stones song that I sang with my post high-school band, yet another song which saw 17-year-old Jim singing about experiences he’d never had. But, of course, it was fun to sing, especially the last choruses, which came after the Mick Taylor’s guitar solo and the horn section had kicked in, and now sounded just gigantic.

It’s a great bit of vocal arrangement, honestly: half of the vocalists are singing “hoooooooooooo-oooooonky tonk” while the other half are singing “honky tonk honky tonk” until they all come together on “women,” which goes on for a bit until Mick Taylor and Charlie Watts drive it on home, punctuated by a joyful Jagger “woo!!!”

There, of course, exists a completely different take on “Honky Tonk Women,” the raggedy fiddle-driven “Country Honk,” which they stuck in the middle of side one of “Let it Bleed,” and while it’s highly enjoyable — and it was always fun to freak out people who didn’t know that the car horn was part of the recording — you’ll note they didn’t release it as a single.

That’s because they knew what kind of powerhouse they had with “Honky Tonk Women,” which was the last Stones single to got to #1 on both the U.S. and U.K. charts — and in fact was their final U.K. #1 period, as the Stones slowly migrated in the public consciousness from being a British Invasion band to an American band that just happened to be from the U.K. — and remains a beloved radio and live staple to this day.