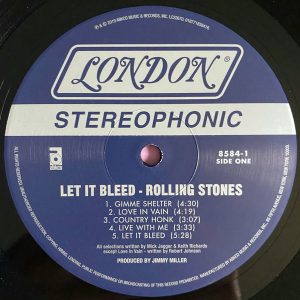 “Live With Me” opens with a roiling funky-as-shit bass line played, of course, by Bil:: checks notes :: Keith Richards? Yup, Keith had the idea for the bassline and just went with it, which was neither the first nor the last time that would happen. He was soon joined by Charlie Watts, doing a straight-up doubletime on his snare, adding a shitton of energy to the song from the very start. With Keith and Mick Taylor having a rhythm & lead guitar dialog, the stage is set for Mick to start singing one of his funniest lyrics.

I got nasty habits
I take tea at three
Yes, and the meat I eat for dinner
It must be hung up for a week

My best friend, he shoots water rats
And feeds them to his geese
Don’t you think there’s a place for you
In between the sheets?

Keith, as is his wont, joins in with the vocal fun whenever he feels like it, but is with Mick all the way as “Live With Me” steamrolls into its chorus.

So Mick doesn’t just want to fuck her, nor does he just want to live with her, he wants to to have a baby with her. I mean as long as she’s fine with the conditions at his house, of course.

And there’s a score of harebrained children
They’re all locked in the nursery
They got earphone heads, they got dirty necks
They’re so 20th century

Well, they queue up for the bathroom
‘Round about 7:35
Don’t you think we need a woman’s touch
To make it come alive?

By this time, Nicky Hopkins has snuck in on the piano, as expected, but he’s joined by Leon Russell, adding even more depth to the rhythm section, which now consists of two guitars, two pianos, bass and drums all moving relentlessly forward, except of course, when Charlie fucks around with the beat, sliding in and out of the double-time for a few bars for no discernible reason outside of mixing it up a bit.

You’d look good
Pram-pushing down the high street
Come on now, honey
Don’t you want to live with me?

After that second chorus, there’s a quick moment where everybody but Mick Taylor breaks down and here comes Bobby Keys with a dirty-ass sax solo that sends smoke out of your speakers while everybody wails aways behind him, Charlie leading the way, natch. It’s a great way for Keys to introduce himself to the Stones, who loved his sound so much that damn straight he was back for the next record.

Whoa, the servants they’re so helpful, dear
The cook, she is a whore
Yes, the butler has a place for her
Behind the pantry door

The maid, she’s French, she’s got no sense
She’s from the Crazy Horse
And when she strips, the chauffeur flips
The footman’s eyes get crossed

By now, Charlie is smashing one of his cymbals on every snare beat, Russell & Hopkins are trilling their pianos, Mick Taylor is sneaking in little extra licks and Mick is ignoring all it, asking one last time with a straight face.

After that, with Charlie still bashing his cymbal, everybody pretty much solos at once until the fade, as if they’re running away from Mick in the same way any sane person would after hearing all of this.

At the very bottom of the credits sheet for Let It Bleed, the Stones declare THIS RECORD SHOULD BE PLAYED LOUD, and I think that “Live With Me” is the song that should be played loudest.

“Live With Me” Official Lyric Video