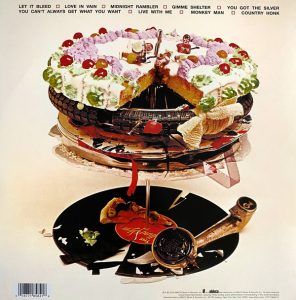 Anyways, I think of that every time I hear “Monkey Man,” a very self-conscious piece of myth-making in the vein of “Sympathy For The Devil.”

“Monkey Man” opens with an ominous Bill Wyman bass line accompanied by equally unsettling piano tinkles by Nicky Hopkins and a Jimmy Miller tambourine, all of which lead into one of Keith Richards’ greatest rhythm guitar parts, a jumping and jiving riff that always seems like it’s on the verge of leaping out of your speakers and kicking the shit out of you.

And it wasn’t, yet, as Keith hadn’t yet entered into full-blown junkiedom, though he’d probably dabbled by that time. (One of the quotes that comes up in nearly book I’ve read about the Stones is from Anita Pallenberg, who pointed out that Keith dealt with his guilt about Brian Jones’s death by becoming Brian, though obviously Keith was made of sterner stuff, in case you haven’t noticed.) In any event, Mick continues, even more delighted in himself than usual:

I’m a cold Italian pizza
I could use a lemon squeezer
Could you do?

But, I’ve been bit, and I’ve been tossed around
By every she-rat in this town
Have you, babe?

Oh look, it’s another Robert Johnson reference! I’d honestly not put together how much Johnson was on Let It Bleed, outside of the cover of “Love in Vain” — which they infamously credited to “Woody Payne” until eventually Johnson’s estate sued. It probably recorded around the same time that Led Zeppelin recorded “The Lemon Song,” in yet another case of great minds stealing from the same source.

Meanwhile after Mick expresses that he’s a monkey man and is glad that the potential lemon-squeezer is a monkey woman, he continues shit-talking.

I was bitten by a boar
I was gouged, and I was gored
But I pulled on through

Yes, I’m a sack of broken eggs
I always have an unmade bed
Don’t you?

Well, I hope we’re not too messianic
Or a trifle too satanic
We love to play the blues

That last verse is, of course, just Mick fucking with people: a wink an a nod to the devilish image they’d been cultivating and darkness they’d been flirting with for a couple of years, and is delivered with Mick’s massive tongue firmly in his cheek, and wouldn’t even come close to being the last time he’d go down this road.

That said, this is all a warm-up for the main event, an absolutely thrilling instrumental break, where Keith turns his jumping jack riff and bounces it pretty much all over the place in a battle with Charlie Watts, who answers Keith with some big slams on his floor tom before overdubbing some slide guitar, or not as the case may be. In addition, Nicky Hopkins is all over this, and even takes a long piano solo while the guitars wheeze all around him. It’s finally cut off by Mick singing “I’m a monnnnnnnnnnnnnnnn-kayyyyyyyyyyyyyy . . . man” a couple of times in the sickest possible voice, literally Steve’s poster come to life.

After that, it’s Mick just screaming that he’s a “ma-ma-ma-monkey” in a shattered falsetto as Keith continues to dance with his guitar. The whole thing is equal parts ridiculous and awesome, and “Monkey Man” is one of those Stones songs that’s honestly so over-the-top I can actually see people hating it with a vengeance, but I come back every single time to how Keith and Charlie are playing off of each other, and that’s what does it for me.