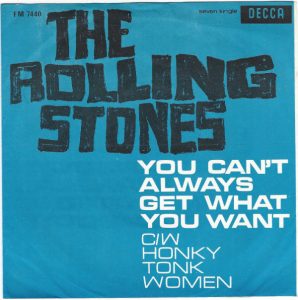 “You Can’t Always Get What You Want” had humble beginnings: a folk song that Mick Jagger wrote by himself, calling it “one of those bedroom songs,” a tiny acorn from which grew an absolutely massive oak.

The first thing you hear on “You Can’t Always Get What You Want” is the London Bach Choir, singing both the first verse and the chorus, as arranged by Jack Nitzche — one last great contribution to their music — and interesting in that they didn’t even hide their Englishness, despite the fact they were taking the place of a gospel choir.

Just one of the many tensions inherent in “You Can’t Always Get What You Want” — perhaps the greatest song ever written about serendipity that was also inspired by watching people succumb to heroin addiction — the biggest album closer that the Rolling Stones ever attempted.

And so, after the chorus, “You Can’t Always Get What You Want” drops into a single Keith acoustic guitar and a lonely french horn, played by multi-instrumentalist Al Kooper, late of Blood, Sweat and Tears — who ironically were about to become a huge band in his wake — and finally Mick, singing the first verse.

And, then as a shaker, played by Rocky Dijon, wafts in, Mick starts the chorus.

And then, as Keith stops his guitar, Kooper comes in with a rising piano part and swirling organ.

But if you try sometimes
Well, you might find

And as the bass, drums, guitar and backing vocalists — not the choir, but rather Doris Troy, Nanette Workman and Madeline Bell — all join in, Mick provides the kicker:

You get what you need!

And after that, “You Can’t Always Get What You Want” launches into its weird, funky groove, drums provided not by Charlie Watts, but genius producer Jimmy Miller, who had a drum part in his head that he just couldn’t translate properly to Charlie Watts, who clearly got the necessity of that drum part, but because he couldn’t play it, he acceded it to Miller.

And I went down to the demonstration
To get my fair share of abuse
Singing, “We’re gonna vent our frustration
If we don’t, we’re going to blow a 50-amp fuse”
Sing it to me, honey

So now we’re in the middle of the song proper, chock full of Mr. Jimmy’s skittering drumbeats, Rocky Dijon’s overdubbed percussion, Kooper’s overdubbed keyboards, and a bunch of electric guitars by Keith Richards, leads and licks and riffs floating in and out of the mix seemingly at random, nothing ever fully dominating, instead creating a tasty gumbo of sound, most evident in the third verse, which is also my favorite verse.

I went down to the Chelsea drugstore
To get your prescription filled
I was standing in line with Mr. Jimmy
And, man, did he look pretty ill

We decided that we would have a soda
My favorite flavor, cherry red
I sung my song to Mr. Jimmy
Yeah, and he said one word to me, and that was “dead”
I said to him

Check out how Al Kooper’s organ leads decorates each line in the first half of that verse, but Keith Richards’ guitar leads decorate each line in the second half of the verse, so interesting that you might not even notice that you should maybe be worried for Mr. Jimmy, even as he’s playing the drums on the long stop-time after the chorus. The choir comes back in here, while Keith’s sleazing out some down and dirty licks, and you think it might be time for the endgame, but there’s another break, and one last verse as the choir drops out again.

I saw her today at the reception
In her glass was a bleeding man
She was practiced at the art of deception
Well, I could tell by her blood-stained hands
Sing it

And after one last repetition of the chorus, we’re finally in the coda of “You Can’t Always Get What You Want,” and it’s an absolute stunner: as Keith continues to toss out guitar licks, Mick screams, and Kooper draws circles with the piano; the choir ratchets up the tension, reaching for the sky, begging and pleading and asking to get higher and higher. But there’s something holding them back. And that something is Mr. Jimmy Miller, still playing the funky, skittering drums, refusing to speed up with everybody, and for a while — years, decades, centuries — there’s an amazing tension, as “You Can’t Always Get What You Want” delays and delays and delays the inevitable until Miller finally plays a straight-up rock and roll beat just as the song goes into its fade. Whew!

That’s how you finish a song.

While there is a single version of “You Can’t Always Get What You Want” — it graced the b-side of “Honky Tonk Women“, and was released as an A-side in 1973 — I’ve never heard it, and I never want to hear it. There’s not a second of this massive, ridiculous song that isn’t utterly spot-on.

“You Can’t Always Get What You Want” Official Lyric Video