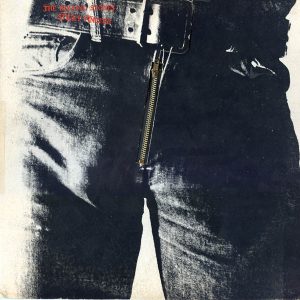 Which is funny, because — as you’ve probably figured out by now — I’m a lifelong Keith Richards stan, and he doesn’t really have much to do with “Sway,” which was written by Mick Jagger and (an uncredited) Mick Taylor. Because it sits between a pair of heavyweights, the scurrilous “Brown Sugar” and the gorgeous “Wild Horses,” I think that it gets overlooked — I mean, as much as any song on fucking Sticky Fingers can be overlooked — when people talk about the record.

But not by me: I love every single inch of this song with all of my heart and soul, from the opening fucked-up count-in to the utterly soaring fade-out, despite the fact that it’s draggy and droogy and druggy and never even bothers to pick up the tempo. But what a mood it creates!

When the Sticky Fingers recording picked back up in 1970 after the three songs they’d recorded in Muscle Shoahs, they used the Rolling Truck Stones Thing and recorded “Sway” in the living room of Mick’s manor house — all the cool English kids had manor houses — Stargroves, and it has just a massive sound from the get-go, as Mick Jagger’s rhythm guitar and Charlie Watts drums are in lockstep from the beginning.

Yes, Mick Jagger’s rhythm guitar. Apparently Keith couldn’t be bothered to make it to the initial session, so Mick strapped on an electric guitar, cranked up the grime and overdrive to 11 and played what is supposedly the first of his rhythm guitar tracks, and with Charlie doing monster fills whenever it struck his fancy, started singing some pretty dark words.

Did you ever wake up to find
A day that broke up your mind?
Destroying your notion of circular time?

Holy fuck! “A day that broke up your mind / Destroying your notion of circular time.” Is this Mick’s reaction to Altamont? Is it him inhabiting the mind of his increasingly addicted partner? As always, with Mick, it’s hard to know, and while Keith didn’t play on the track, he sure as fuck overdubbed vocal harmonies at some point. Which is maybe why I was this many years old when I found out that I’d been mishearing the chorus all these years.

I’ve always heard it as “it’s just that evil life has got you in its sway,” not “it’s just that demon life has got you in it’s sway” like all of the lyrics sites and the Jason Isbell cover and fucking Mick Jagger on the live versions all tell me it is. Which is fine, I love how I can still learn something new about “Sway” after almost 40 years of playing it as loud as I possibly can.

And now that I’ve read “demon life,” I hear “demon life,” — or more accurately, “de-moooan loife” — which isn’t all that different from “evil life,” except that it now ties “Sway” to both “Monkey Man” and “Sympathy For The Devil,” only ten times as dark, especially since Mick Jagger, having posed questions in the second person during the first verse, makes statements in the first person during the second verse.

Or it could be about Brian Jones, I guess, whose funeral wasn’t attended by either Mick or Keith, or any of the other people who got caught in the slipstream of the Rolling Stones in the late 60s and who just couldn’t handle being that close to the eye of the crossfire hurricane, eventually getting flung every which way in the process. It wasn’t just the bodies that were piling up, it was also the minds and spirits.

On the bridge, Charlie and Mick repeat their duel from the opening, as the first hint of Paul Buckmaster’s string arrangement pokes through the chaos.

This is instantly followed by first of Mick Taylor’s solos, which has a really neat moment where it speeds out from the rest of the song, and Nicky Hopkins gets so excited that he follows Taylor out there for a second or two, before reeling it in and letting Taylor run off by himself until Mick cuts him off with a “WHOO!!”

Hey, hey, hey now
One day I woke up to find
Right in the bed next to mine
Someone that broke me up with a corner of her smile, yeah

After the second one, Mick Taylor swarms back in, this time doing a solo that no “whoo!” is going to be able cut off, destroying his own notions of circular time, this time fully joined by Nicky Hopkins, waking the dead with swirling piano flourishes as Paul Buckmaster’s string arrangement comes soaring in, while Charlie is playing fill after fill after fill with only Bill Wyman’s bass and Mick Jagger’s rhythm’s guitar holding the whole thing together.

It’s utterly magnificent, one of those musical moments to die for, a glorious assemblage of beautiful, glorious, demonic chaos that quite literally only the Rolling Stones could come up with. My longstanding assertion is that while Sticky Fingers probably isn’t the greatest Rolling Stones album, it’s absolutely the most Rolling Stones album, so dense with Stonesy Stonesness that a song as weird and powerful and amazing as “Sway” is considered a minor song. Except by me.