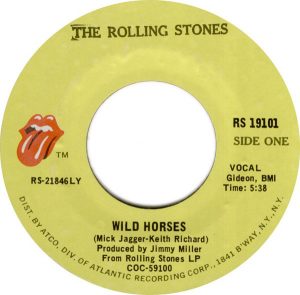 In any event, it was a true collaboration between Mick and Keith, right down to singing the chorus into a single mic while swigging from a bottle of bourbon — that iconic picture from the inner sleeve of Exile on Main St., but two years prior — which no doubt contributes to it being so incredibly powerful, as it opens with a stack of slowly strummed acoustic guitars played by Mick Taylor & Keith as Mick Jagger fakes it so real he was beyond fake.

Childhood living is easy to do
The things you wanted, I bought them for you
Graceless lady, you know who I am
You know I can’t let you slide through my hands

And as Charlie Watts and Bill Wyman — plus future Big Star & Replacements producer Jim Dickinson on piano — come in for the chorus, somehow not increasing the tempo, Mick and Keith sing one of the most beautiful melodies they ever wrote.

At the end of the chorus, Charlie drops out again for the first two lines of the second verse, coming back in — plus a lead guitar from Keith — for the back half and the second chorus.

I watched you suffer a dull, aching pain
Now you decided to show me the same
No sweeping exits or offstage lines
Could make me feel bitter or treat you unkind

And then Charlie drops out again as Keith takes an extended solo — I love how it comes out just a bit too early, like it was escaping from prison — electric notes fluttering above an suddenly-aggressive acoustic guitar, and the lack of drums is not only unexpected, it also makes the song, because by this point, you really have no idea what’s going to happen next, which it that we have drums coming back in on the third verse, which seems to address Faithfull’s overdose and recovery.

I know I dreamed you a sin and a lie
I have my freedom, but I don’t have much time
Faith has been broken, tears must be cried
Let’s do some living after we die

And then Charlie drops out again, for a much less intense solo, before coming back in for one last repetition of the chorus. I’m probably focusing too much on the drums, but it’s a fascinating, unorthodox arrangement, and one that I learned when Sedan Delivery did our ill-advised but pretty decent cover of “Wild Horses” back in the day.

Of course, lots of people covered “Wild Horses,” most notably The Flying Burrito Brothers, whose singer, Gram Parsons, was simultaneously a trust fund dilettante and an incredibly important figure in American music. Parsons and Keith Richards were incredibly close drug and music buddies, and the Burritos actually put out their much more countryish version of “Wild Horses” before the Stones did, making it one of two songs from Sticky Fingers that had pre-release cover versions. (We’ll get to the other one in a couple of days.)

I also think that “Wild Horses” was a bit of a slow burn in terms of its popularity. Yeah, the Stones released it as a single in 1971, but it only made it to #28 on the Billboard charts, they didn’t play it live at all between the mid-1970s and mid-1990s. But I think, over the years, it’s come to be considered a major song.