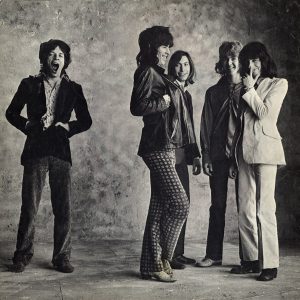 But instead, they gave it to Marianne Faithfull, who had written at least some of the lyrics — enough to eventually get the credits changed to Jagger/Richards/Faithfull in 1994 — who recorded it in July, 1968 with Mick, Charlie & (maybe) Bill, plus Ry Cooder and Jack Nitzche. And Faithfull’s version is pretty great, too, with Nitzche’s swirling organ dominating the sound.

They put Faithfull’s version out as a single in 1969, but a horrified Decca realized that there was a drugs reference right there in the title, and pulled it after making only 500 copies, which makes no fucking sense, though it remained in print in other countries. Obviously, it wasn’t a hit: a five minute song about someone who wanted to float away on a bed of opiates? Not likely. Not bloody likely.

And so the version of “Sister Morphine” we’re actually talking about today was recorded in March of 1969, and once again featured Cooder and Nitzche, but playing radically different parts.

Here I lie in my hospital bed
Tell me, Sister Morphine, when are you coming round again?
Oh, and I don’t think I can wait that long
Oh, you see that I’m not that strong

That opening verse is just Mick singing pained and terrified vocals — check out how he holds the “lonnnnnnnnnnnng” and “stronnnnnnnnnnnng”. It’s at this point where Ry Cooder comes in with the slide guitar, making real the pain Jagger’s character is no doubt feeling and matching the fucked-up-ness of the lyrics.

The scream of the ambulance is sounding in my ears
Tell me, Sister Morphine, how long have I been lying here?

One of the things about “Sister Morphine” is how it layers on the instrumentation. First Keith, then Mick, then Ry Cooder, and now Bill Wyman, who comes in with a big gauzy bass.

What am I doing in this place?
Why does the doctor have no face?
Oh, I can’t crawl across the floor
Ah, can’t you see, Sister Morphine, I’m trying to score?

And while the echo on “score” is almost too much, these are all really good questions. But you know there aren’t any answers forthcoming. Just more pain, in the form of Jack Nitzche’s echoed piano, which sounds like withdrawal symptoms come to life, playing off and around Cooder’s slide and eventually a cool, groovy beat, courtesy of one Charlie Watts, who rocks it up so much you forget that “Sister Morphine” started as a slow acoustic blues.

Well, it just goes to show
Things are not what they seem
Please, Sister Morphine, turn my nightmares into dreams
Oh, can’t you see I’m fading fast?
And that this shot will be my last?

And then “Sister Morphine” stops dead yet again, waiting for the arrival of one last character in the song.

Sweet Cousin Cocaine, lay your cool, cool hand on my head
Ah, come on, Sister Morphine, you better make up my bed
Because you know, and I know, in the morning I’ll be dead
Yeah, and you can sit around, yeah, and you can watch all the
Clean white sheets stained red

I’ve never quite known what to make of the arrival of the alliterative Cousin Cocaine at the end of the song, unless to suggest that the person in the song died of a speedball in the end? It doesn’t really matter, of course, because “Sister Morphine” is a mood, and as long as scary slide and even scarier piano are hanging around the bloodstained dying bed.

In the end, “Sister Morphine” is probably the doomiest song that the Rolling Stones ever recorded, which is also probably why it didn’t get a lot of live workouts — it basically got played in the late 90s and that was it — but it’s also essential to why Sticky Fingers is so awesome.