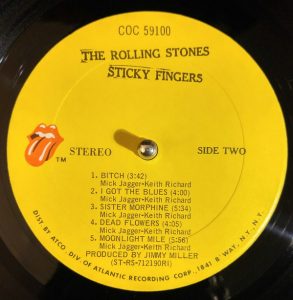 Coming after the harrowing “Sister Morphine,” one might expect “Dead Flowers” — which starts with a reassuring lope and Mick affecting slightly too cornpone of an accent — to be a respite from all of the scary-ass drug songs that have dominated Sticky Fingers.

Well, when you’re sitting there in your silk upholstered chair
Talking to some rich folk that you know
Well, I hope you won’t see me in my ragged company
Well, you know I could never be alone

But then, “Dead Flowers” gets to its chorus, and with Keith right there on the harmonies, whatever respite it might have provided almost instantly dissipates.

Well, OK then. Of course, you can ignore all of this, if you want and just enjoy the sound of Mick’s acoustic guitar, Keith’s twangy little fills, Ian Stewart’s barrelhouse piano and Mick Taylor’s leads over the Wyman-Watts rhythm section, because “Dead Flowers” just flows like a river, and sounds like it was a blast to record. That said, it was kinda hard to ignore the second verse.

Well, when you’re sitting back in your rose pink Cadillac
Making bets on Kentucky Derby Day
I’ll be in my basement room with a needle and a spoon
And another girl can take my pain away

After that second verse, Mick Taylor takes flight with a lovely liquid solo that takes the place of Mick having to write a third verse, because what is there to say? Which is why they just repeat the chorus a couple of times — the second time insisting that she send the dead flowers by the “U.S. Mail,” which unfortunately was a better idea in 1971 than in 2021 — and send the song to an ending with a couple of rings by Charlie Watts on his ride cymbal.

“Dead Flowers” was a fun song to play, which is why we covered it a couple of times in the second incarnation of Sedan Delivery, the last of the Stones songs that we learned to play. But of course, it’s been covered and covered and covered, probably to the point that it can’t really be considered a deep cut.