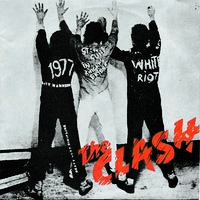 When Epic Records decided not to release The Clash here in the Colonies in 1977, I suspect that “White Riot” was a huge reason. And not just for the incendiary lyrics about race and class and power, but for the crazy guitar noise that Strummer and Jones made.

Because when “White Riot” was finally released here in 1979 on the U.S. version of The Clash, it was a weird, neutered take: Joe Strummer’s rhythm guitar is nowhere to be found, and Mick Jones’ guitar solo in the middle is buried under sound effects. Oh, and the football chant vocals on the chorus reduced to a couple of guys yelling in a bar.

I realize now that a) it’s the original single version (a piece of info that was nowhere on the packaging of U.S. version of The Clash) and b) if you’d never heard the import, it was still pretty powerful stuff. But I had, and as such, I hated it. Hell, I just now did an A/B test of both versions, and it still doesn’t hold a fucking candle even as a novelty item. It’s always been one of the key reasons I think the U.S. version of The Clash is inferior to the U.K. version, despite all of the great singles added to it.

So man, “White Riot.” Fury encapsulated. When I tried everything I could to evangelize The Clash to my high school friends who had at least respect for my taste, it’s the song that separated the — well, none of us were men — boys who could stomach white-hot punk rock from the boys who couldn’t.

When my friend Kevin told me he didn’t like The Clash because there was (and I’m paraphrasing because it was 35 years ago) “a chord or something” in their music that really annoyed him, I’m guessing it was the sound of “White Riot” he was talking about. While the guitars of Joe Strummer and Mick Jones were probably in tune, but you could tell that those guitars hated each other and all they wanted to do was piss each other off.

But that was, of course, part and parcel as to why I loved it. And coming after “Janie Jones,” “Remote Control,” and “I’m So Bored With The U.S.A.”, there was no doubt that “White Riot” was a climax of sorts just four songs into their debut album.

Official video for “White Riot” from The Clash (U.K.)