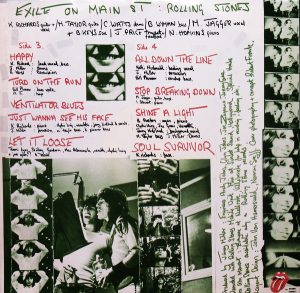 Which I why wonder which station they took it to: was it one of the big FM stations, like KMET or KLOS? Or was it a top 40 station, like KHJ. My guess is that it was a top 40 station, though I guess it would have been easier with the more freewheeling FM stations. And what if you were listening that night? Did anybody record it? I used to put a portable cassette player right next to my transistor radio, in order to tape songs from KYNO, and Craig across the street had some voodoo thing where he could tape the radio directly onto an 8-track.

So I wonder if somebody taped it. Especially since they had the DJ play the song twice!! Now, obviously, that recording would have no value, outside of bragging rights, but in 1972, whoever would have taped it would have been instantly popular.

As the opener to the final side of Exile on Main St., “All Down The Line” kind of jumps out because it’s really the only uptempo rock ‘n’ roll song in the back third of the album, sitting smack dab in the middle of a passel of gospel and blues songs.

And so it opens with a patented Keith choogle, followed by Charlie and Bill joining right in, and Mick careening in with the first verse.

“All Down The Line” is dominated by stellar vocals and even more stellar guitar. I love Mick’s “whoooo” at the beginning of the second verse, and backing vocalist Kathi McDonald adds a nice touch to the Mick and Keith overdubs and even gets a couple of solo moments of joyfully yelling “all down the line” at various points.

And, of course, “All Down The Line” perfectly captures the Keith Richard / Mick Taylor guitar dynamic that had come to dominate their live shows: nearly every moment has some really nice Keith rhythm guitar or scorching leads from Taylor. There’s some nice moment after the first chorus where Keith riffs around the horn section, and the extended solo Mick Taylor takes before the final chorus, amps the whole song up to another level, getting everybody all excited for the final chorus.

My favorite part is the sheer adrenaline of “well you can’t say yes, and you can’t say no” which sounds so much fun you forget that’s quite the dilemma Mick’s talking about there. That’s followed by yet another Keith vs. the horns riff-off (Keith wins) and then an outro where Mick’s asking what Mick asks: “won’t you be my little baby for awhile?”

One of the things about Exile, of course, is just how well-paced it is, and sticking a fun, catchy “All Down The Line,” in between the rawness of “Let It Loose” and the disintegration blues of “Stop Breaking Down” was an absolute masterstroke on every level.

“All Down The Line”