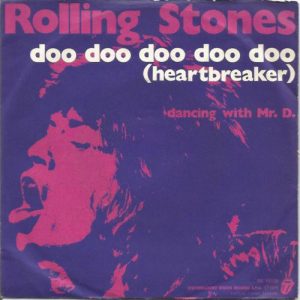 And this is where I come in: 1973 was the year where I was first conscious of hearing new Rolling Stones songs on the radio. I’m sure I’d heard them my whole life, of course, but 1973 was the first year I started paying attention to what was actually on the radio, which — because it was 13 KYNO, a prototypical Top 40 station — meant that hit singles from 1973-1976 are permanently etched in my positronic pathways. And if I was going to be honest, more like 1980, because from 1977 on, I worked in a computer room where the radio was permanently tuned to 13 KYNO AM (though when I would come in on Saturday mornings to work by myself, I’d tune it to Rock 96FM.)

Which, of course, included all of the Stones singles from that period, from “Angie” through “She’s So Cold,” many of which will show up in the next couple of weeks or so. Except for “Angie,” the only Rolling Stones #1 hit single that I’ve never really liked. Luckily, “Angie” was followed by the funky “Doo Doo Doo Doo Doo (Heartbreaker),” a compelling piece of ACAB funk that opened with a dirty-ass clavinet played by Billy Preston.

Luckily, that kind of thing never happens today! By this time, of course, Charlie Watts has kicked in with beat, Mick Taylor is alternating funky riffs with jazzy fills and Keith Richards is playing a relatively busy bass (Bill Wyman plays on less than half of Goats Head Soup), giving Mick a lot of cover for the first chorus, as the man who once sang “every cop is a criminal” gets pretty blunt about the PO-lice.

After the second verse — about a ten-year-old girl overdosing — the “doo doo doo doo doos” come in at the end of the next chorus, framed by the horn section, and “Doo Doo Doo Doo Doo (Heartbreaker)” basically has all of its pieces in place. There’s a breakdown where Mick Taylor lets out a mournful solo for atomsphere, but mostly the back half is variations on the chorus — those “doo doo doo doo doos” are a massive hook for sure — and Mick ad-libs.

It all sounded great on the old AM radio, I tell you what, and while it wasn’t as big of a hit as the dread “Angie,” it still made it to #15 on the Billboard Singles charts — and would have gone higher if it didn’t have such a silly title (and I’m sure it would have been called “Heartbreaker” if Led Zep hadn’t beat them to it) — and is one of those Stones songs that still gets played on oldies and classic rock stations alike, though it hasn’t been played all that much in concert over the years.